You don’t know what you’ve got until it’s gone…
Police academy cadet Charlie Burns can’t believe his luck when the gorgeous blonde he meets in a bar murmurs those magic words: “Nothing serious, ’kay?” Mind-blowing, no-strings sex with Ever Carmichael—it’s the holy grail of hookups for a guy who’s too busy following in his law enforcement family’s footsteps to think about getting serious. Charlie’s all about casual…that is, until Ever calls it quits and his world tilts on its axis.
Ever knows that when you control the relationship game, you can’t get played. But for the first time, she wants more than short-term satisfaction. Step one: end her fling with commitment-phobic Charlie. Step two: sacrifice herself to the ruthless NYC dating scene. Yet everywhere she turns, there’s Charlie, being his ridiculously charming self. No online match or blind date compares to the criminally hot cop-in-training, but they’re over. Aren’t they?
If love is a four-letter-word, why does the idea of Ever seeing someone else tie Charlie up in knots?  Now he’s desperate to win her back…and a little date sabotage never hurt anyone, right?


Get Your Copy Today! 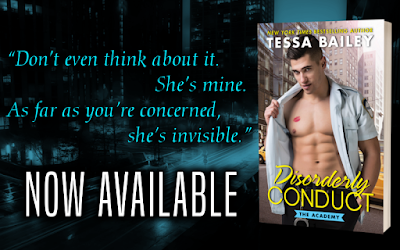 TOUR GIVEAWAY PRIZE INFO
Giveaway is running from 8/29-9/12.  There will be one winner of paperback copy of Indecent Exposure: The Academy across the entire tour.  Giveaway is being hosted on Rafflecopter and is sponsored by Pure Textuality PR.  Open to US shipping addresses only.
https://www.rafflecopter.com/rafl/display/637fbedf96/

Tessa Bailey is originally from Carlsbad, California. The day after high school graduation, she packed her yearbook, ripped jeans, and laptop, and drove cross-country to New York City in under four days. Her most valuable life experiences were learned thereafter while waitressing at K-Dees, a Manhattan pub owned by her uncle. Inside those four walls, she met her husband, best friend, and discovered the magic of classic rock, managing to put herself through Kingsborough Community College and the English program at Pace University at the same time. Several stunted attempts to enter the work force as a journalist followed, but romance writing continued to demand her attention. She now lives in Long Island, New York with her husband and daughter. Although she is severely sleep-deprived, she is incredibly happy to be living her dream of writing about people falling in love.

This promotion is brought to you by Pure Textuality PR.