New York Times best selling author Gena Showalter returns with a sizzling Original Heartbreakers tale, featuring a rough, tough bad boy brought to his knees by... a kindergarten teacher?
The king of one-night stands...
To inherit--and destroy--his father’s business at long last, Brock Hudson needs a temporary wife. The ruthless ex-military heartthrob has always avoided romantic entanglements. Women are sweet, but vengeance will be sweeter. Or so he thinks. Only one woman will do, but the vulnerable beauty is more than he bargained for—sexier, wittier, and utterly irresistible.
The queen of the deep freeze…
After an abusive first marriage, Lyndie Scott has sworn off relationships. But still she longs for a child of her own. Turns out, the brawler who used to frighten her with only a glance is the answer to her problems. She agrees to his proposal, with a caveat: spend every night in bed with her, then walk away for good when it’s time to divorce. Even if she’s pregnant.
A marriage of breathtaking inconvenience...
As the days pass too quickly and the nights heat up, Brock battles a sense of possession and obsession. Will the former commitment-phobe convince his wife they’re better off together, or will she pack her bags and go? 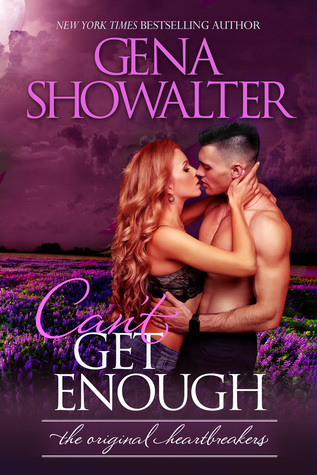 Can't Get Enough by Gena Showalter is the sixth book in her Original Heart breaker series which takes place in a small town called Strawberry Valley. Though this is the sixth book each book can be read as a stand alone and it follows the story of a different couple. I don't think it is necessary to read the previous books but the signs of Brock and Lyndie's story starts of a couple of books back.

Let's start with Lyndie. Lyndie has spent her entire life under an abusive father then an abusive husband. Now after finally getting over it she's coming to terms with herself. She is a strong independent woman and doesn't want to be tied down by anything or anyone. I liked Lyndie. Yes she was hesitant at first but she did trust Brock. Lyndie wanted to be a mother very bad and she could fulfil that dream of hers with Brock's proposal.

Brock was a nice hero to. Due to an emotionally abusive mother he didn't believe that anyone could genuinely love him. Things change when his father passes away and he is left to take care of the company. The only clause is that he has to marry to take ownership. So Brock asks Lyndie the only girl friend he trusts and desires above anyone else.

Can't Get Enough follows the marriage of convenience tropes and I've realised that I do enjoy it at times. Lyndie and Brock were good together and they both helped the other over come their fears and insecurities. I also enjoyed seeing Ryanne and Jude and Dorothea and Daniel. They were great friends who always supported Brock and Lyndie and were always there to pull their heads out of their asses.

Can't Get Enough was comparatively shorter than the rest of Gena Showalter's books. But this was a good thing because there was no unnecessary angst and the conflict was resolved pretty swiftly. If you enjoy small town romances I'd suggest picking up one of the Original Heart breaker books.