Review- Scoring with the Wrong Twin by Naima Simone

Shy, awkward Sophia Cruz has a hard time telling her vivacious identical twin “no.” But when her sister begs her to swap places for a modeling shoot, she caves … again. Then Zephirin Black walks onto the set. The brooding, aloof, and gorgeous tight end for the Washington Warriors. But she can keep it professional… She has to. Because the adorkable Cruz twin has no luck with guys once they compare her to her sister. After a bad break-up, Zeph hasn’t been big on second chances—and even less with trust. But he finds himself giving please-call-me-by-my-middle-name-Sophia both. The woman he’d dismissed as a spoiled cover model is different from the first time he met her. Quirkier. Funnier. Definitely sexier. What started as one night turns into another…and another…and another…Still, Sophia can’t go on keeping her secret from him. But telling Zeph the truth will mean losing him for good. 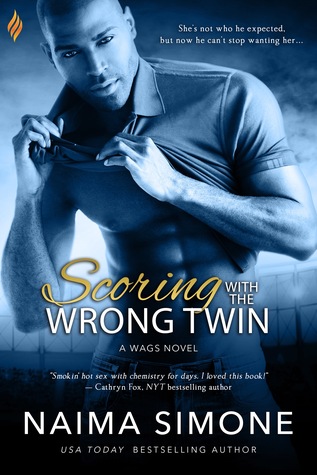 Scoring with the Wrong Twin by Naima Simone was a book I impulsively hit request on on Netgalley after reading the summary. The plot sounded nice and it had elements which made for the kind of romance I usually end up enjoying. Some things were pretty unrealistic but then again this is fiction and overall the book was enjoyable.

Let's start with Sophia. Sophia is the shy awkward twin. She is more into creating things such as apps on the computer than making herself look model like and pretty like her twin sister. When Sophia's sister needs her to stand in her place Sophia agrees for it as a one time deal. What she doesn't expect is the chemistry she has with Zeph, the tight end for the Washington Warriors.

Zeph has known what it feels like to be betrayed by a loved one. He is not into giving second chances and is already wary of anyone who claims to love him. When Zeph meets Sophia he expects a spoiled model but what he finds is a gorgeous girl with a refreshing personality. Zeph doesn't want a relationship at first but the more he gets to know Sophia the more he wants her.

The author has done a great job of showcasing the chemistry between Zeph and Sophia. They were genuinely attracted to each other and it was there for all to see. Sophia was keeping a big secret from Zeph and when it comes out it definitely explodes but you can see that she has her reasons behind it.

Naima Simone has done a great job of fleshing out the characters with their personalities. Sophia and Zeph both have insecurities and vulnerabilities. It was nice to see them work through their issues to be together in the end. Zeph also had a great group of friends and there was definitely something going on between a few of them. Maybe we'll get a book for someone. All in all you Scoring with the Wrong Twin was a quick romance.