Book Tour- The Heart of Aleppo by Ammar Habib 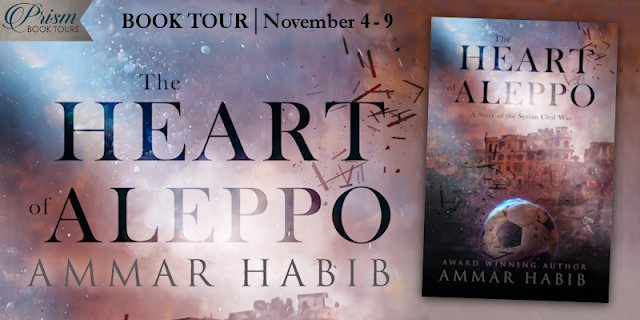 On Tour with Prism Book Tours


We hope you enjoyed the tour! If you missed any of the stops
you'll find snippets, as well as the link to each full post, below:


Launch - Why Ammar wrote The Heart of Aleppo

In an over-politicized world, my wish is for this work to humanize those we call “refugees”. The Heart of Aleppo is not about the politics of the Syrian Civil War or any other conflict. Its aim is not to convince readers to support any faction or political party. Instead, this story is about the unbreakable spirit of humanity. It is about how humanity often shows its true strength during the darkest times. . .

Two days before Nabeel leaves for the last time, I find him standing at the kitchen counter with his friend, Zakariah. I don’t know his rank, but Zakariah serves directly under Nabeel in the army and only lives two miles down the road. The two of them always seem to be on leave at the same time.

Their voices are low, almost secretive, but I catch the look in Nabeel’s eye. Except back then, I didn’t recognize it.

“What are you guys talking about?”

"This "stand alone" novel is a bittersweet tale of family, friendship, war, and sacrifices. It is a highly recommended reading material for Young Adults and Adults alike. It raises several good discussion points. It is ideal reading for Book Clubs."

He looks back at me with a smile, but it fades when he sees my expression.

I glance at the ground before replying, “I don’t think I want to be a doctor anymore.”

He takes a few steps towards me before crouching down to come to my eye level, urging me to continue. “Ms. Farooq said I’m not smart enough.”

"The Heart of Aleppo starts with an explosion of action that drags you into the story immediately. That momentum slows at points, but picks up near the end, making it easy to breeze through in one sitting."

He takes a deep breath and glances down at my feet. His eyes look like he’s weighing something, wondering if he should say it or not. When he does speak, his voice is different. It’s no longer speaking to me as his younger brother but as his friend. “You know, Zaid, Zakariah was joking about what we were talking about.”

He nods before his gaze focuses back on me. “Not even a few weeks ago, my soldiers and I were in a bit of a… well, situation.”

"As with most war stories, the story told in The Heart of Aleppo is heartbreaking. Ammar Habib does a great job with the voice of a 13-year-old enduring the destruction of Aleppo during the Syrian Civil War. One of the things that impressed me was Habib’s ability to tell the story without including the politics of the war. It is truly a story of the spirit of humanity in difficult circumstances."

The foul stench is everywhere. It floods the buildings and road. It’s in every crevice. It’s soaked into the very brick and mortar of these streets I used to know.

We walk in a single file: Salman up front and me in the back. The sack quickly grows heavy on my shoulder, soon seeming as if it’s filled with bricks. But I trudge on. The weight of the sack is nothing compared to what my heart is feeling right now as I see the city I call home—a city that has stood for over 7,000 years—suddenly turned into wreckage.

Not even a day and a half ago, we walked from school to the bus stop. The roads were crowded with cars, trucks, and buses blaring their horns. The sidewalks were packed with pedestrians and merchants. Now, it’s a ghost town. It’s as if there was never any life here.

The city is… hollow.

A wall of smoke and smog surrounds me on all sides, preventing me from truly seeing anything clearly. Is it a blessing or a curse? I don’t see any of the destruction until I’m right on top of it. If Salman was even five more steps ahead of me, he would be lost behind the wall. We’re out on an open street; yet, it feels as if I am trapped in a prison. The dark walls of this prison follow me, not allowing me to escape their grasp.

Every step is harder than the last. My feet become weighted stones. I almost can’t feel the uneven and cracked concrete underneath me. It’s as if I’m moving in a trance. I don’t know where I am or where I’m going. I’m simply walking through the abyss and listening to the only sound: my soft footsteps.

The longer we travel and the heavier my sack becomes, the more a fear grips me. The fear that we don’t know if we’re fleeing danger or walking into a den of hungry wolves. The fear that by the time we do reach home, what happened to Jari may have already happened to everyone.


ACME Teen Books - Kids and YA Too! - Excerpt

Every time I look up above, hoping to catch some sight of the heavens, all I see is smoke. It’s blocking out any light from the stars. There will be no relief tonight.

I notice a silhouette up ahead. It… it appears to be the minaret of a masjid. Hope is suddenly injected into my heart. With every step, the minaret breaks out of the smoke, and I can better perceive the masjid itself. I see its domed roof. It’s standing tall above all the destruction. If it’s still standing, it’ll be safe inside, right? Nobody will come into a masjid and harm us.


My Life, Loves and Passion - Excerpt

Salman hops down to join Fatima. I follow him. My feet hit the ground hard, shooting a shot of pain up my legs. The sack violently smashes against my sore upper knee, and I almost fall over before Salman catches me. That hurt more than I thought it would. As I rise back up, the foul odor immediately hits me.

The fear-striking silence surrounds me once more. It’s my only companion. The hollow sound of silence is worse than gunfire and explosions. Worse than screams. Worse than terror. Because mixed into this silence is abandonment and suffering.


Don't forget to enter the giveaway at the end of this post...

The Heart of Aleppo:

From the ashes of the Syrian Civil War comes this story of hope, love, and courage...

After standing for over 7,000 years, Aleppo's ruin came overnight. Separated from his family during the night the rebels attacked the city, thirteen-year-old Zaid Kadir is lost in the middle of a war zone. Alongside his friends, he is forced to survive the dangers of a civil war he does not even fully understand. Zaid witnesses the destruction of the brutal Syrian Civil War as it grows more deadly by the day and rips his city apart. However, as he braves this destruction, as he desperately tries to survive this catastrophe, he discovers something. Zaid realizes that it is in the darkest hours when humanity's spirit of hope burns brightest.

Ammar Habib is a bestselling and award-winning author who was born in Lake Jackson, Texas in 1993. Ammar enjoys crafting stories that are not only entertaining but will also stay with the reader for a long time. Ammar presently resides in his hometown with his family, all of whom are his biggest fans. He draws his inspiration from his family, imagination, and the world around him.

One winner will receive a signed copy of Habib's national award-winning novel, Memories of My Future (US only). Memories of My Future is an historical/inspirational novel that was published in 2016. It received several accolades after its release, including the Independent Press Award in May 2017.