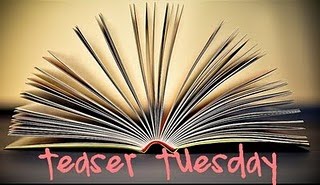 Teaser Tuesday is a weekly bookish meme hosted by Miz B of Should Be Reading. Anyone can play along! Just do the following:
• Grab your current read• Open to a random page• Share two (2) “teaser” sentences from somewhere on that page• BE CAREFUL NOT TO INCLUDE SPOILERS! (make sure that what you share doesn’t give too much away! You don’t want to ruin the book for others!)• Share the title & author, too, so that other TT participants can add the book to their TBR Lists if they like your teasers!
Here's my teaser-
"Its one thing to be afraid. Because I am. I'm scared as hell of a lot of stuff, but it's an entirely different thing for people to know I'm afraid."
-Measuring Up by Nyrae Dawn
Goodreads Summary-

Seventeen-year-old Annabel Conway is tired of the Hillcrest High School elite making her life miserable because she’s not a size two. This summer, she's hiring a personal trainer to help her lose weight. Annabel doesn’t expect her trainer to be a gorgeous guy around her age. Boys like Tegan are jerks. They pretend to like girls like her so they can make an idiot out of them. Been there, done that. Totally not going there again. She kind of hates him on principal. Blond. Muscular. Funny. It doesn’t help that he knows her measurements!Soon, Tegan's so much more than that. He’s the boy who teaches her to box when she has a bad day. Who jogs with her and lets her set the pace. Who kisses her until she melts. He makes her feel beautiful regardless of what the scale says. Unlike her mom, he doesn’t expect perfection, and he doesn't try to shield her from the world like her dad and best friend. Tegan likes her the way she is.But what happens when he’s not there? He can’t always be there… Will Annabel be able to stand on her own and learn that she already measures up? That her worth doesn’t lie in what the world thinks, the scale says, or even what Tegan tells her—but in herself?
What's your teaser this week?
Janhvi
Posted by The Readdicts at 8/28/2012 04:44:00 pm