Hey guys!
Today we have with us Tnahsin, Pulkit and Srivatsan who are the authors of The Prophecy of Trivine. Let us see a little bit about the book and then we can head on to the interview :) There's also a super cool giveaway at the end. 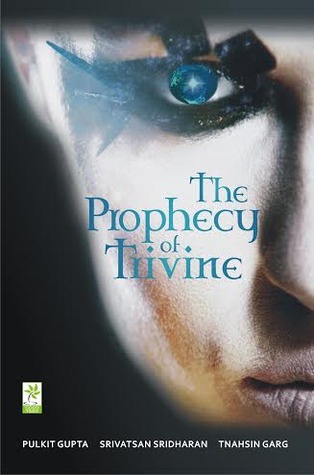 An emissary of an advanced alien race travels to the Earth to undertake responsibility of an experiment that has gone out of control. The outcome of this fateful experiment, which was conceived millions of years ago by her species, now rests in her hands. As she prepares to deliver her final judgment, she comes across three young men in a sacred forest who change her life forever.
These three men- a scientist, a hacker and an artist, happen to take refuge in that forest, trying to escape from the oddities of their own unfair lives. Struggling with their dreams and demons, they begin to explore the dark and paranormal behavior of the forest by forging a companionship. From the rare flora and fauna breathing alive on the ground to the deadly wide expanse of the whimsy black sky, everything they find is yet another puzzle unsolved.
Little did they know that four of them hold in their hands the future of mankind and much beyond imagination, they are connected through an ancient Prophecy that was long lost in the sands of time.

There is also a book trailer which goes with it:

The Prophecy of Trivine was written jointly by three friends, who were once together in college, and are now pursuing their lives & careers in distant corners of the world. But they still share the common passion of writing.

​They have come a long way, from the summer of 2010 when it all began, to the beginning of 2014 when the book will be in hands of friends. 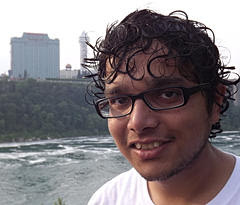 ﻿Pulkit is a Computer Science professional who completed his Bachelors in Engineering from Thapar University, India in 2011. He has been an avid reader and an enthusiastic writer since his childhood days. He maintains a number of blogs which are in various stages of decay, but his most recent short story work can be found on his recently createdblog:

He currently works as a Technology Analyst at Goldman Sachs, Bangalore 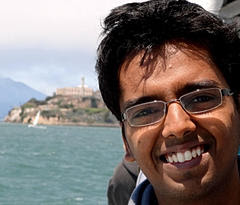 Srivatsan is a Computer Scientist, who recently graduated with a Masters degree from Purdue University in the United States. He completed his Bachelors in Engineering from Thapar University, India in 2010. Along with computers, he is extremely passionate about writing. Most of his artistic ideas have taken shape in the form of short stories, speeches, travelogues, and essays. Some of them can be found in hisblog:

He currently works as a Software Engineer at Yelp, Inc. in San Francisco, California. 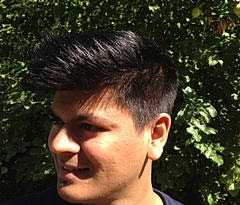 Tnahsin was born and brought up in India where he got a Bachelor's degree in engineering. After that he travelled to United States in search of higher education and adventure, and ended up getting a Master's degree in 2012.  When tired of his scientific pursuits, he's often found scribbling something unintelligible on some decayed corner of the Internet. He does have a neglected blog for those who like clicking around in curiosity.

He is currently pursuing a PhD in applied sciences in Northern Europe.

1.Tell us a little bit about yourself.

We’re writers who were unfortunate enough to end up in engineering colleges, but fortunate enough to meet each other and dream up a story together. While there’s certainly loads of money up for grabs in building real worlds, the allure of building imaginary worlds is irresistible.

2.Tell us about your book, The Prophecy of Trivine.

"The Prophecy of Trivine" is a sci-fi/fantasy adventure novel set in a mystical forest in the foothills of the Himalayas, where three young men, a scientist, a computer hacker and an artist seek refuge, gripped by their life’s own dreams and demons. As they explore the dark and paranormal nature of the forest, they find themselves inextricably connected to an ancient Prophecy that was foretold millions of years ago. More can be found at www.theprophecyoftrivine.com

3.How did the three of y’all come together to write The Prophecy of Trivine?

Our common love for all things literary brought us together as we tried to bolster the literary society at Thapar University. And one fine day, over a cup of chai at the cafeteria, a random rant about the origin of the universe blossomed into a concept that later became the The Prophecy of Trivine.

4.What kind of research went behind The Prophecy of Trivine?

The research topics sprawled from carcinogenic chemicals to exotic flowers, from astronomical technicalities to ethical hacking, and humanitarian issues to habits of werewolves.  So, yes, we spent a lot of time on wikipedia.

5.What was the most difficult part in writing and publishing The Prophecy of Trivine?

Because we were geographically separated for most of the project, it was a big challenge to work together and come up with a coherent manuscript. Picture moody writers hurling abuses at each other, one pining for his morning coffee, and the other with sleep in his eyes after a long day. It was as fun as it sounds though! Also, what they say about first time authors struggling to get published - it’s truer than you would believe!

6.Why do you think readers should pick up The Prophecy of Trivine?

Given that the Indian fiction market is saturated with badly-written-cheesy romances and well-researched-but-boring rehashed mythologies, we thought it’s high time we introduced something worth reading and remembering. Hence, this fresh attempt at Indian Science Fiction & Fantasy.  Besides, initial reviews say that it’s a thrilling page-turner. We do not disagree. :)

7.What are the three things you would want to have with you on a deserted island?

Pulkit - I guess internet is out of the question, so a book (or fifty), a notebook, and a cache of pirates’ rum!

Tnahsin - I’ll just take a magic lamp, you know the one which pops out a genie thingy.

8.If you could read one book for the rest of your life, which would it be?

Tnahsin - The complete collection of Shakespeare (yes, there’s a fat collectible book out there!)

Pulkit - The Catcher In The Rye

9.Who are your favorite authors and why?

Pulkit - George RR Martin, for telling an intricate and complicated story convincingly well, JK Rowling, for lighting up my childhood, and RL Stine, for inspiring me to write (I’m not being completely serious about the last one).

Srivatsan - Ooh, that’s a toughie. I think I’ll go with Michael Crichton, for his exceptionally vivid imagination and consistent performance in making far-fetched technologies seem amazingly real. (And yes, JK Rowling of course, for having made my childhood the best childhood ever!)

Tnahsin - There are so many to list here. But the ones that come immediately to my mind are Hemingway, Fitzgerald, Faulkner, Rushdie, Wilde...and the list goes on.  Don’t ask me why. We should really talk about this some other time, over coffee? ;)

10.Any advice you would like to give to aspiring authors?

For a start, there’s a book by Stephen King called ‘On Writing’ and another one called ‘Ernest Hemingway on Writing’. That ought to do.

Thank you so much Pulkit, Srivatsan and Tnahsin!

These guys have been generous enough to offer up TWO copies of The Prophecy of Trivine to two lucky Indian readers. So go forth and enter!
May the odds be ever in your favor! :)

That's it guys. Hope you enjoyed the interview.
Happy reading! :)