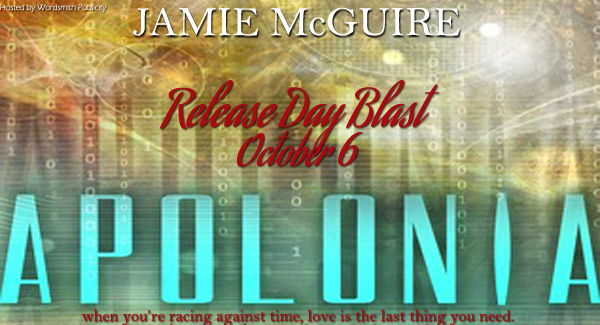 We would love for you to join us in celebrating the release of   APOLONIA by New York Times, USA Today, and Wall Street Journal bestselling author Jamie McGuire!

“They killed me, but I survived.”

Three years after Rory Riordan foiled her own murder, she still trusts no one. Not Dr. Z, the eccentric college professor who has taken her under his wing, not Benji, the endearing, attractive classmate who insists on following her around, and certainly not Cy, the beautifully dark and mysterious boy who sits on the first row in Dr. Z’s Astrobiology class and asks far too many questions.

When Rory witnesses Cy being abducted by soldiers in the middle of the night, she finds herself submersed in a world that holds even more secrets than she could imagine--even darker secrets than her own.

“Welcome!” Dr. Z began. “I am Dr. A. Byron Zorba, and you’ve arrived at Geobiology and Astrobiology . . . uh . . . with lab. That’s a separate class. Uh . . . later,” he added. “You should also be enrolled in the lab, separately from lecture. If not, see administration. So! Here, and in the partnering lab, you will study organic matter from microbes, rocks, and environmental samples. In lab, you’ll extract and, more importantly, interpret these samples. Beyond that, we will reconstruct ancient environments to understand how life evolved within the samples.”

“It’s really not that bad. Don’t be a baby,” I said, keeping my voice low as the professor went over the rules and syllabi.

“I’m still running in the mornings,” Benji said. “You should come with me sometime.”

“I’m not getting up at the crack of dawn to run until I stop freezing. That’s not healthy. It’s stupid.”

I blocked out the rest of his question. The trace of a British accent in his voice and his perfect grammar would have never piqued my attention before, but on that day it was annoying and snooty.
Not only was Cyrus tall, dark, and handsome but, as class progressed, he also proved to be Dr. Z’s most adept and eager student.

“I was curious to know if you happen to be Egyptian?” the professor asked.

I don’t know what expression was on Cyrus’s face, but he must have smiled, because Dr. Z clapped his hands once, and a wide grin made his already full cheeks puff out.

Dr. Z patted Cy’s shoulder and shook his finger a few times. “We’ll have much to talk about. See me after class.”

“Oh, Christ, get a room,” I snarled under my breath.

The professor’s hobby was trying his hardest to be an Egyptian scholar. I thought maybe Cyrus’s origin was the reason for Dr. Z’s fascination, but that didn’t turn out to be it at all. Cyrus never answered the questions that Dr. Z presented to the class, but he asked at least a dozen of his own. He was curious, and I couldn’t deny that his questions were a work of art.

Dr. Z answered a few questions before lecturing for just ten minutes, giving us a reading assignment, and then waving us away, twenty minutes earlier than expected.

Everyone looked around, unsure what to do until I began packing my things. That started a chain reaction, and noise filled the room as students crammed their laptops into their bags and moved to leave.

After our dismissal, Cyrus stood next to Dr. Z’s podium, and they spoke in low voices with a lot of nodding and a few smiles. Oh, hell no. I stood up, grabbed my bag, and walked down the steps, standing in the space next to Cyrus.

“Cyrus has just returned from a summer in Mali,” Dr. Z said, smiling.

“No,” Cyrus said flatly. He didn’t offer further explanation, so I stared at him until he became uncomfortable and looked away. That was my very favorite thing to do to everyone.

“What?” I said the word louder than I’d meant and high enough to be embarrassing.

Cyrus nodded once to us both, and then he was gone.

“Are you replacing me?” I asked, my heart pounding. My assistant job was connected to my scholarship. If Cyrus stole it from me, I could be in real danger of losing that money. It was too late to find a student position that wasn’t already taken.

“Of course not. You saw the data I sent. You’ll never have time for anything else if I don’t add someone to the team.”

“I can do it,” I said, only feeling a tiny bit relieved. “You know I don’t go home for the holidays. I don’t mind working weekends.”

Dr. Z smiled. “Rory, I know you don’t mind working weekends, but you should.”

He walked out of the classroom, leaving me among his weird sculptures and artifacts. None of it made sense. Dr. Z had always been careful. I couldn’t imagine he would invite someone he didn’t trust into his precious laboratory. Something about Cyrus felt off, but he didn’t seem dangerous or untrustworthy. If the professor had been considering Cyrus as just a third team member, he would have mentioned it before today. The only explanation for my exclusion from this news was that he was planning to replace me. What’s more, hastily inviting a new student into his lab wasn’t just uncharacteristic; it was troubling.

My eyes were all over the place, looking at a different inanimate object with every thought. I couldn’t lose my position as Dr. Zorba’s assistant. Everything was riding on it.

The room grew darker, bringing my attention to the large windows. The clouds outside were gray. At this time of year, the weather was more likely to bring in a cold front than a storm. The wind began to blow the few leaves that had just started to fall from the huge oak trees. I pulled one of several tubes of lip balm from my jacket pocket and ran it over my lips. I loved winter up until the night I died. Now it just seemed ominous.

Clenching my teeth with determination, I lifted my bag and swung it over my shoulder. I refused to lose my assistant position with Dr. Z. Cyrus could take his thought-provoking, eloquently worded questions and shove them up his ass. 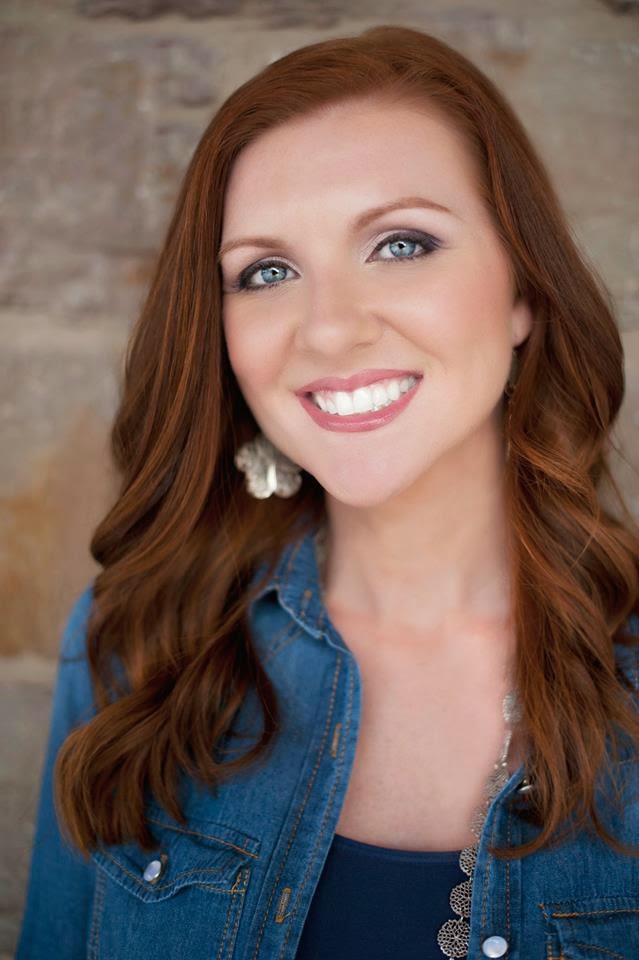 Jamie McGuire was born in Tulsa, OK. She attended the Northern Oklahoma College, the University of Central Oklahoma, and Autry Technology Center where she graduated with a degree in Radiography.

Jamie lives on a ranch just outside Enid, OK with husband Jeff and their three children. They share their 30 acres with cattle, six horses, three dogs, and Rooster the cat.