Not Otherwise Specified on Goodreads

Etta is tired of dealing with all of the labels and categories that seem so important to everyone else in her small Nebraska hometown.

Everywhere she turns, someone feels she's too fringe for the fringe. Not gay enough for the Dykes, her ex-clique, thanks to a recent relationship with a boy; not tiny and white enough for ballet, her first passion; and not sick enough to look anorexic (partially thanks to recovery). Etta doesn’t fit anywhere— until she meets Bianca, the straight, white, Christian, and seriously sick girl in Etta’s therapy group. Both girls are auditioning for Brentwood, a prestigious New York theater academy that is so not Nebraska. Bianca seems like Etta’s salvation, but how can Etta be saved by a girl who needs saving herself?

The latest powerful, original novel from Hannah Moskowitz is the story about living in and outside communities and stereotypes, and defining your own identity. 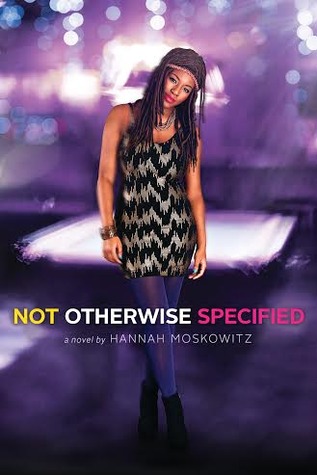 
I had initially read Hannah Moskowitz's Gone, Gone, Gone, and it was a pretty good book that I still remember sometimes, mainly because the two main characters were very well portrayed, making them unforgettable. The same stands true for Not Otherwise Specified, because even though the story was good, the characterisation was even better. I don't know how she does it, but Hannah creates and writes about characters that stay with you, and that, I feel is very beautiful.


Not Otherwise Specified is the story of Etta from Nebraska who dreams of going to New York or basically anywhere that's not Nebraska. She is a girl with some issues and that makes her real and hence, relatable. She is always herself, although she is trying to figure out exactly who that is. And that is what makes the book a true coming of age story, because in spite of all the important things going on and the important characters standing out, this book is about figuring out oneself while trying to not break down even when it seems like the easy way out.


Like I mentioned before, the side characters in the book stood out really well, as well. So while Etta is the protagonist, her story itself is shaped by everything that goes on around her and everyone around her. Each secondary character moulds themselves perfectly to fit into Etta's story and for that again, I must commend Hannah's beautiful characterisation which really makes the reader feel belonged.


Overall, while are some bits of Not Otherwise Specified that I didn't necessarily like or even understand at sometime, it was still a really different, enjoyable and very good read that I would recommend to fans of young adult LGBT stories that take up the whole coming of age theme.