STOP THE COUNTDOWN. SAVE THE WORLD…


Leaving the beach, seventeen-year-old Janelle Tenner is hit head on by a pickup truck.
And killed.
Then Ben Michaels, resident stoner, is leaning over her. And even though it isn’t possible, she knows Ben somehow brought her back to life…
Meanwhile, Janelle’s father, a special agent for the FBI, starts working on a case that seems strangely connected to Ben. Digging in his files, Janelle finds a mysterious device – one that seems to be counting down to something that will happen in 23 days and 10 hours time.
That something? It might just be the end of the world. And if Janelle wants to stop it, she’s going to need to uncover Ben’s secrets – and keep from falling in love with him in the process… 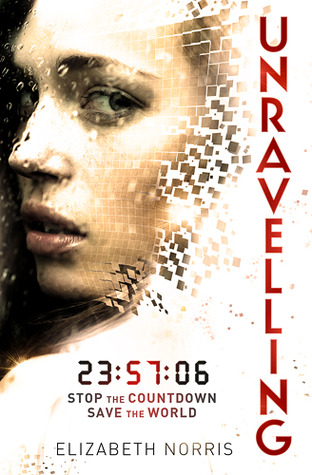 
I had Unravelling lying on my shelf since quite some time before I actually got to it. Maybe because I've become very picky with the young adult books I read nowadays but Unravelling was overall an average read for me. I've read some brilliant reviews for it but I didn't find anything that extra ordinary about it. I think the main reason for that is the female lead.

Let's start with Janelle. Janelle has to act like a parent to her younger brother since a long time because her mother is not all there and her dad is always out working for the FBI. Janelle has learnt to be self sufficient until an accident occurs and things change. I liked Janelle in the beginning but later on she started getting on my nerves. I found it irritating that she didn't consider anyone to be as intelligent as herself.

The fact that she had no other female friends also bothered me. I found it a bit unrealistic to believe that this seventeen year old is trying to figure out what the FBI can't and she wants to save the world without anybody's help. I get that this is science fiction but still it was too much to take. I just didn't agree with all the decisions Janelle took. She could have handled her situations better.

What I did like was the theory that there are multiple universes that the author has created. I also liked Ben and his friends. The bit of romance was nice but the suspense part was a little weak because I had figured out who the killer was long before. Ben and his friends' abilities were very interesting. I also really liked Janelle's younger brother Jared and her best friend Alex.

The whole countdown to the world's end was exciting as the book progressed. What I really liked was Elizabeth Norris' writing style. The chapters were compact and that is what kept me hooked and flipping the pages till I finished another chapter. Unravelling was an okay read for me.