Review- She Walks, She Leads by Gunjan Jain

She Walks, She Leads on Goodreads

• Nita Ambani launched the Indian Super League, on the lines of FIFA, to boost football in India
• Sudha Murty gave her savings to her husband, Narayana Murthy, to help start Infosys
• Naina Lal Kidwai was the first Indian woman to graduate from Harvard Business School
• Kiran Mazumdar-Shaw started Biocon with a seed capital of Rs10,000
• At the age of sixteen, Sania Mirza became the youngest and the first Indian woman to win a Grand Slam
These are some snippets from She Walks, She Leads which profiles twenty-six iconic women in modern India. These leaders tell their stories, up close and personal. Their relentless ambition to shatter the glass ceiling, their pursuit for excellence and the challenges that came their way – all of this is captured vividly in this exclusive anthology. Each chapter is based on extensive research and has never-seen-before photographs of these luminaries. The chapters are followed by interviews with their companions and close confidants who have seen them grow over the years. The women leaders profiled in the book come from different fields like banking, media, cinema, sports, fashion, philanthropy and industry. 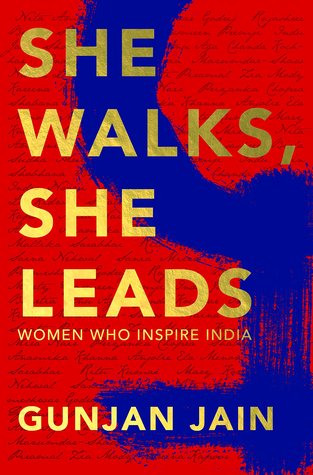 
While I was very much looking forward to reading She Walks, She Leads because I have previously studied and written a paper on feminism and do not miss an opportunity to read about inspiring women, I was apprehensive because it had been a long time since I read a non-fiction work and the sheer length of this book had me questioning everything. But thankfully, this book turned out to be very interesting and packed with information, inspiration and impact.


Clearly author Gunjan Jain has done heaps of research because while she has written about well-known women, there are many facts that are new and interesting to know. So while I was worried that this book wouldn't tell me anything more than what Google would be able to, there were so many aspects and points that me go "oh, is it?" And that means it was new, fresh and informative, which was the biggest plus point.


An eclectic mix of women from various fields, Gunjan Jain has interviewed and written about women in business, movies, sports and what not, so we go from Nita Ambani to Sudha Murthy to Saina Nehwal to Priyanka Chopra and the stories of each of these women and all the others are truly inspiring and nicely told. That fact that the author even interviewed people close to these women was really lovely because it gave another perspective entirely on the life of these powerful women.


In spite of its length which was the biggest problem for me, She Walks, She Leads was a nice read, both because of the structured and meticulous way in which it was written and Gunjan Jain's crisp and to the point writing. I also felt that the book focused only on well-known women, while people around you and I do their own little inspiting bit in their own way. Nevertheless, I would definitely recommend this book to those who wish to be inspired.

*Note: A copy of this book was provided by author Gunjan Jain in exchange for an honest review. We thank them.