"Mine." She licked her lips. "Because you were mine, and I was yours, and then everything went to hell." 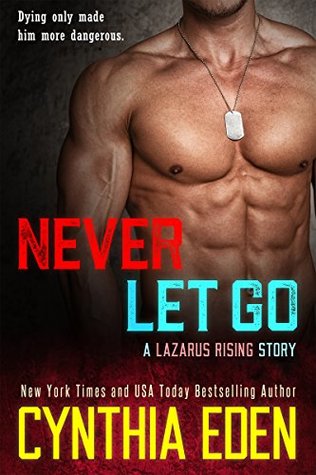 He was more than just a man...Dr. Elizabeth Parker didn't like wild, dangerous men...yet she still found herself falling for sexy Navy SEAL Sawyer Cage. He was her exact opposite--a man she should definitely stay away from, a man who lived for the thrill of danger...but he was also the man she found herself wanting more than any other.But their secret relationship ended in heartbreak when Sawyer was killed on a mission. Grieving for him, the last thing Elizabeth ever expected was to find Sawyer listed as a test subject for the top secret government project she was heading--a project called Lazarus.For years, Elizabeth had worked feverishly to unlock the secrets of life and death, and with her Lazarus formula, she finally thought she'd made a breakthrough. Only she never expected to use Lazarus on her lover.But the choice is taken out of Elizabeth's hands...Sawyer is given the Lazarus formula, and he's transported to a remote government facility. At that facility, Sawyer wakes once more, only he's not the same man. He's stronger, he's faster, his reflexes and his senses are ten times better than an average man's. The government calls Sawyer a super soldier... Elizabeth still calls him...hers.Unfortunately, Sawyer has no memory of his life before Lazarus. All he knows is that something about the sexy doctor awakes a primal response in him. He wants her, and he'll do anything to possess her. Soul-deep, he feels that she was meant to be his.Death waits in the darkness.But something is wrong inside the Lazarus facility. The test subjects are holding back secrets, and danger seems to lurk in the air. The Lazarus subjects are super-human now, and some of those subjects have a very, very dark side. Twisted cravings drive them to the very edge of sanity. Can Sawyer keep Elizabeth safe from the madness around them...or will the growing darkness consume them both?NEVER LET GO...a gripping new romantic suspense from New York Times and USA Today best-selling author Cynthia Eden.