A Christian boy in Pakistan is accused of blasphemy―a crime punishable by death.Haunted by a tragic past, a young lawyer named Sikander Ghaznavi returns to Pakistan after many years abroad, and takes on the defence of the boy.He reaches out to the sharpest human rights lawyer he knows―the woman he has loved for years, but now another man’s wife.As they deal with their unresolved feelings, the lawyers confront a corrupt system, a town turned against them, and a prophecy that predicts their death.Will they save the boy? Or will the city of Quetta, its prejudice inflamed by religiousextremists, consume them and deliver them to a deadly fate? 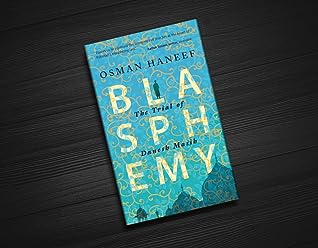 Release date: April 2020
Published by: Readomania
REVIEW:
When I first saw- let alone read the summary or even the title of the book- I knew I had to read Blasphemy as it looked right up my alley. A book set in Pakistan dealing with the trial of a Christian boy sounded like a setup I would have picked up on my own anyway, but I’m so grateful that @iamreadomania kindly offered to send me a copy of the book in exchange for a review.
Sikander Ghaznavi returns to Pakistan and takes it upon himself to defend a Christian boy accused of blasphemy, a crime punishable by death, seeking a sort of redemption. He seeks help from his former lover Sanah, a human rights lawyer. Both the well developed characters with a story so interesting that ends in the most graceful manner (a rarity, really) come to terms with the reality of their country.
A poignant tale about religious extremism, Blasphemy is an eye opener not just to that, but various other issues like domestic violence, child abuse, death threats, false accusations, blind faith and so much more that plague the streets of Pakistan. Author Osman Haneef’s writing is brilliant, from the description of the city Quetta to its people, everything was put down meticulously. His storytelling had me engrossed throughout, and left me feeling shocked, stirred and satisfied.
This was somewhat like The Kite Runner meets The Reluctant Fundamentalist, but to be very honest, the comparison is just so a reader would pick up this book if they like the two mentioned. On its own, Blasphemy stands a sharp, unique, impressive and moving read.
*Note: A copy of this book was provided by Readomania in exchange for an honest review. We thank them.