The young and driven Sagar Bansal leads a team of six on the path of a digital adventure. His plan is to put the humble cane-panipuri vendor, found in every other street in a metropolitan city, on a digital platform.
As they gear up to launch an app to sell panipuri, the cloud of risk looms large. All five entrepreneurs who earlier ventured into the business had died in road accidents. But all that is overlooked and forgotten in the excitement of the team reaching the verge of a VC funding.
Is the death of all five entrepreneurs a coincidence? Can Sagar and his team overcome the odds? Why are the ordinary vendors dying one after another like a pack of cards?
The Panipuri Crimes is a thrilling story weaving together the world of entrepreneurship and struggle, love and other demons, and the murky world of crime. 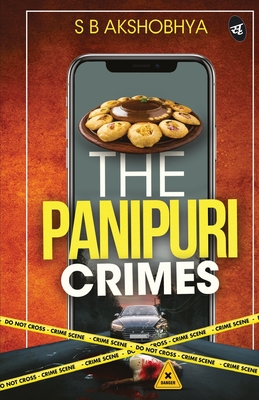 Release date: April 12th 2021
Published by: Srishti Publishers and Distributors
Page numbers: 208
REVIEW:
An interesting title for a murder mystery, The Panipuri Crimes combines two things that I’m not too fond of. It did sound like it would be a good read, as it’s the story of a bunch of young engineers who wish to put the panipuri we find on every street on a digital platform. The interesting fact is that everyone before them who had tried to do something similar was murdered under mysterious circumstances.
I found it difficult to relate to a bunch of things in The Panipuri Crimes, from the plot to the language to the characters. It took me a while to understand what was going on but barely a few pages to know who the person behind the crimes could be and still, I feel confused after reading the book which is why I don’t think I can explain exactly what I read. The language for me, was unnecessarily complicated. Had either the plot or the language been much simpler, I would have actually found the book to be engrossing. Coming to the characters, while each one stood out in their own way, I could not relate to any of them and I didn’t find them particularly interesting. There were too many of them and it lead to even more confusion, as if the plot’s confusion wasn’t enough.
I think the problem here is that I don’t have an engineering and corporate background so almost everything was a blur for me. As a reader, I want to know about things that I’m not aware of, not run away from them. Had everything in this book been broken down and portrayed in more relatable terms, I would have enjoyed it. I bet there are readers out there who will thoroughly enjoy this book, but it clearly didn’t do anything for me.
*Note: A copy of this book was provided by Srishti Publishers and Distributors in exchange for an honest review. We thank them.