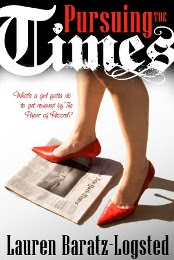 *NOTE: We (The Readdicts) received a copy of Pursuing The Times from author Lauren Baratz-Logsted in exchange for an honest review. We thank Lauren for the book!

When author Lauren Baratz-Logsted contacted us about reviewing her romantic comedy, Pursuing The Times, not only was I super excited about the book, but I felt so delighted to just see an email from Lauren sitting in our inbox. I absolutely liked and thoroughly enjoyed reading the author's The Bro-Magnet (my review of which can be read here) and I was sure Pursuing The Times would be just as entertaining. And trust me, it didn't disappoint. Not even a bit.
Pursuing The Times was so funny that not only did I laugh while reading, but somewhere in the middle of nowhere, when I remembered an incident or a dialogue from the book, I found myself laughing just as hard as I did the first time. Mercury Lauren is the author of chick-lit novels and her only aim is to get her book, by any means whatsoever, in the hands of New York Times Book Review Editor-in-Chief Frank D'Arcangelo for a review. Mercury, however has no idea who she insulted at the National Book Awards until her agent and only friend, Angel from The Angelica White Literary Agency informs her later that the very object of her hideous insults is the very man she'd do anything to get hold of.
Throw in another author Nick who supposedly writes "important" stuff, Mercury's crazy but absolutely cute family comprising of her parents, her brother Ralph, whose comebacks and views on Mercury and her career were too comical and a sweet sister in-law Sheila and you have a joyride at your disposal. Mercury was an imperfectly perfect protagonist. She was hilarious in her own ways and her absolutely whacky ways of looking at things made her so entertaining and likeable. She was pure fun and like one of the characters in the book rightly said, she had chutzpah. The lengths she went to in order to get the ARC of her novel, Falling For Prince Charles, in the hands of any well established NYTBR reviewer were oh-my-God-so-hilarious! At first, I thought that Pursuing The Times started out really slowly or maybe it was just my own reading slump, but once it kicked off, it really was difficult to stay away from reading this highly entertaining and ridiculously smacking book.
Author Lauren Baratz-Logsted has a way of keeping the reader alert and entertained at the same time with a seriously bang-up plot, absolutely real, genuine and cool characters, nonchalant and smashing dialogue and lastly, the promise of an utterly amusing and awesome journey on which one has a really good time, which in the end, is all that matters- having a good time. I loved the craziness and the hideousness of Pursuing The Times. It was a funny, sweet, cheerful and playful read that doesn't require the brain to do any work except read and that makes those pretty laughter lines on your face a permanent feature throughout the duration of the book. It was a lightsome and comical read that I was in dire need of after having read a series of dark books. Author Lauren Baratz-Logsted's Pursuing The Times is truly a very great read! 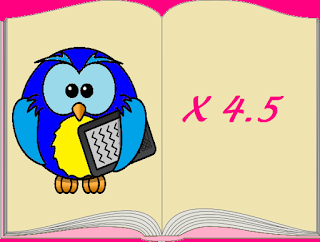