Falyn Fairchild can walk away from anything. Having already left her car, her education, and even her parents, the daughter of the next governor of Colorado is back in her hometown, broke and waiting tables for the Bucksaw Café. After every shift, Falyn adds to her shoebox of cash, hoping to one day save enough to buy her a plane ticket to the only place she can find forgiveness: Eakins, Illinois.
The moment Taylor Maddox is seated in Falyn’s section at the Bucksaw, she knows he’s trouble. Taylor is charming, breaks promises, and gorgeous even when covered in filth—making him everything Falyn believes a hotshot firefighter to be. Falyn isn’t interested in becoming another statistic, and for a Maddox boy, a disinterested girl is the ultimate challenge.
Once Falyn learns where Taylor calls home, everything changes. In the end, Maddox persistence is met with Falyn’s talent for leaving, and for the first time, Taylor may be the one to get burned. 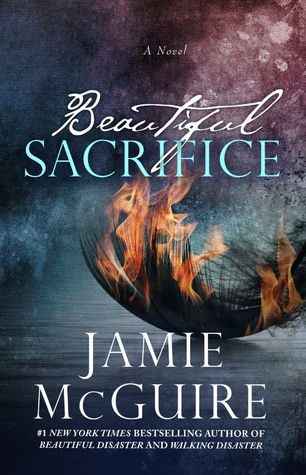 Normally, I do not read, nor do I like to read romances. There are, however, a few authors who stand as my exceptions when it comes to cheesy stories. On a daily basis, I prefer dark and serious reads. So the rare times when I do pick up a romance, all I hope for is an escape and a distraction, and that is exactly what Beautiful Sacrifice ended up doing for me. While I have come across many negatives reviews for the book, I honestly cannot pinpoint to anything specific that I liked or didn't like about the book that neither made it a must-read, nor a stay miles away from this book read. If anything, it was an average but fun book. Having said that, what has to be made clear here itself is that the more the book is on my mind, the more dumb it seems, which it was. But taken as a light, one-time read, which is far better, it was quite okay really.

Plot-wise, Beautiful Sacrifice lacked depth and strength. It was the most dullest and predictable plot ever. From the beginning, I had my suspicions about the female protagonist, Falyn's past, and I ended up being right which frustrates me to no end because I want stories to surprise me, to give me the unexpected. Even the so called "twists" didn't pose as twists in the literal sense, but just added to the boring, irritating and highly unnecessary drama that was going on. Honestly, sometimes the plot took such ridiculous turns that the book could be classified as comedy rather than romance.

Coming to the protagonist, while Falyn's past wasn't anything fresh or new, I genuinely liked reading about her present life where she worked at The Bucksaw Café. The environment there was so welcoming and friendly and instantly added to some nice warmth, in terms of the café owners and Falyn's co-workers who were very kind and fun. Falyn herself was very insecure and kept questioning herself which was frustrating at times. Taylor Maddox was really nice though. The main problem is that, from the very start until the end of the book, Flayn and Taylor's relationship didn't see any development or progress. It was exactly the same, and that was a major disappointment. What was admirable was that for the first time, a Maddox brother lived up to the expectation of a Maddox boy.


Talking about the Maddox clan, as usual, it was lovely to meet them all, but Jamie McGuire, please! Enough with the same old, same old stuff. I am so fed up of the Abby and Travis wedding plot. It is too much of a coincidence that all these Maddox brothers find the perfect one at the same time. Seriously? I don't need to say every time that I love Abby and Travis. That is no surprise. But even for me, it is getting too much now. Move on, people. And speaking of coincidences, Beautiful Sacrifice had way too many to count. Like I said in the very beginning, I would neither bash nor buy this book. It served its purpose of a book by giving me a distraction for the time during which I read it. Nothing special or extraordinary in it, Beautiful Sacrifice is just another cheesy romance.