Brent Payton works hard, plays hard, and has earned his ladies’ man reputation. But he’s more than just a good time, even though no one seems to see it. Until a gorgeous brunette with knockout curves and big, thoughtful eyes walks into his family’s garage and makes Brent want more.
Ivy Dawn and her sister are done with men, all of them. They’ve uprooted their lives too many times on account of the opposite sex, but that’s over now. The plan seems easy until a sexy, dirty-taking mechanic bursts in Ivy’s life and shakes everything up.
Brent can’t resist the one person who sees past his devil-may-care façade, and Ivy finds it harder and harder to deny how happy he makes her. But she has secrets of her own and when the truth comes out, she must decide if she’ll run again or if she’ll take a chance on forever. 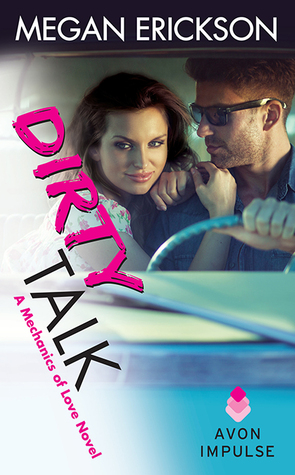 
Dirty Talk is the second book in Megan Erickson's Mechanics of Love series. This book is about the middle Payton brother, Brent. I really enjoyed Dirty Talk. I think its because now we know most of the characters and I also really liked how Brent and Ivy's story went.

Brent has always been the joker brother in the Payton family. Its the way he dealt with his mother leaving and his father being a workaholic. Brent has always had Cal and Max but he is not serious about anything else. I really liked Brent. We got to see the different sides of him. He actually wanted to be serious about Ivy and her daughter. For once in his life he wanted more and I love how he never gave up on Ivy.

Ivy and her sister Alex have moved to town with Ivy's daughter Violet for a new beginning. Ivy and Alex have made a pact to stay away from men because they always lead to trouble but Ivy is seriously attracted to Brent. I loved Ivy. She was a sweet heroine who saw Brent for who he was. I loved Ivy and her daughter's relationship and how she always put her family first.

Ivy and Brent's romance is definitely slow burn. They always have chemistry but Ivy is hesitant and Brent is patient. I loved how Brent never gave up on Ivy. I also loved the bond Brent and Ivy's daughter shared. It was so sweet and just what Violet needed in her life. I liked how Ivy helped Brent go for what he really wanted it life.

Once again we get too meet the rest of the Payton clan. It was nice to see Jenna and Cal. Brent's father and Asher also played an important role. It was also really nice to see the bond between Ivy and her sister Alex. I am eager to read Alex's book which is next to know about her past. Dirty Talk was a great read.