Review- A Player for A Princess by Tia Louise

From the Mediterranean to the Caribbean, the game continues…
Zelda Wilder is on the run, this time from the ruthless assassins who’ve decided she knows too much to live.
“Playboy Prince” MacCallum Lockwood Tate isn’t about to let the beautiful player who stole his heart get away—if only he could decide whether he wanted to save her or strangle her for her dangerous choices.
After tracking her down to a casino in St. Croix, Cal follows Zee back to Tortola where he intends to keep her safe. One problem: Zelda’s criminal liaisons are one step ahead of her.
Lives are threatened, and all of the players' skills are tested in this plot to capture a killer and save a princess. 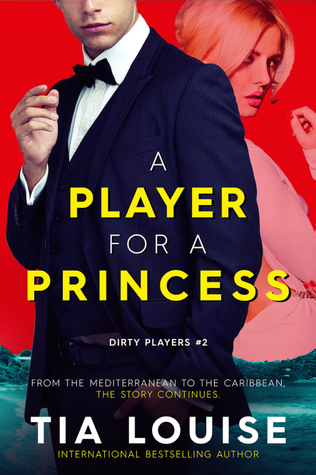 A Player for a Princess is the second book in the Dirty Players series by Tia Louise. This book starts off right where the first book, The Prince and the Player ended. The ending for the first book was not exactly cliffhangerish but it was definitely unfinished. Unlike the last book where we get Rowan and Zee's point of view, in this book we get only one couple's point of view that is Zee and Cal's. I'm having some mixed feelings about the book but overall I did like A Player for a Princess.

Let's start with Zee. Zee is on the run. She thinks she isn't good enough for Cal and she doesn't want to put Cal or her sister Ava in harm's way. I had really enjoyed Zee's point of view in the first book but I did find her to be stubborn and obstinate in this one. There was definitely danger around Zee but she refused Cal's help. I mean she was still lovable and strong and a survivor but she was very stubborn as well.

I was really glad to see that we got Cal's point of view in this book. He shone in the last book and I so badly wanted to see his thoughts and emotions. Cal was intense in his feelings for Zee and we really got to see what a long way he's come from being the playboy prince. Cal took responsibility for his actions and he was so ready to rescue Zee.

The chemistry between Zee and Cal was great as always. I loved them as a couple in the previous book and I did like them here as well. But unlike the previous book, Zee and Cal are not always together in this one. I think the separation irriated me a bit and I thought that Cal was just sitting and waiting for an amount of time while Zee had to suffer quite a bit. The book dragged for me in some parts.

This is where I also felt like Ava and Rowan should have been there for Cal and Zee for the crucial bits. They were there at some points but I was not satisfied with that. Another warning is that this book does contain some violence. It was not horribly graphic but it was pretty harsh. So A Player for a Princess was definitely not as fun as the previous book and it had a more serious tone. But I think I'm just comparing the two books because I read them back to back. Things do get resolved in this book but a few threads are left open for the next books. So, in conclusion, A Player for a Princess was not my favourite but it was still a good read.