With trust issues a mile long, Ryanne Wade has sworn off men.  Then Jude Laurent walks into her bar and all bets are off.  The former Army Ranger has suffered unimaginably, first being maimed in battle then losing his wife and daughters to a drunk driver. Making the brooding widower smile is priority one. Resisting him? Impossible.

To Jude, Ryanne is off limits. And yet the beautiful bartender who serves alcohol to potential motorists tempts him like no other. When a rival bar threatens her livelihood, and her life, he can’t turn away.  She triggers something in him he thought long buried, and he’s determined to protect her, whatever the cost.

As their already scorching attraction continues to heat, the damaged soldier knows he must let go of his past to hold on to his future...or risk losing the second chance he desperately needs. 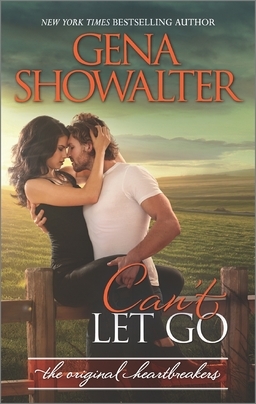 Let me start off by saying that I have a love hate relationship with this series. I genuinely disliked the first two books in the Original Heartbreakers series and I decided not to continue with the series. Fast forward to a few years later and I decided to give it another shot by reading Can't Hardly Breathe. I actually found the new set of friends to be much better than the previous ones so I decided to read Can't Let Go.

So the first disclaimer is that though this is a part of a series Can't Let Go can be read as a complete stand alone. Some characters and friends to reappear and things are set for the next book but it is easy to follow. This is the story of Jude and Ryanne. Jude has been trying his hardest to ignore Ryanne for the longest time. He has already lost way too much in his short lifetime and except for his two best friends he is not willing to invest emotions in anyone.

Ryanne on the other hand has had a mother who went from men to men at the speed of lightning. She doesn't trust men and just wants to run her bar successfully. Ryanne wants to travel the world and see places. What she doesn't expect is to be pulled in by Jude's damaged soul. I liked Ryanne she had a nice personality but I did find her to be childish at times.

Ryanna and Jude had chemistry. There is no doubt about that. The only issue I had- and I've found this happening more and more with Gena Showalter's books -is that I found both the hero and heroine to be quite immature at times. They each changed their mind about the other at the drop of a hat and were never quite sure of what they wanted from the other.The constant yes or no got irritating for me.

Gena Showalter writes really well and it shows. I really liked visiting Strawberry Valley again and meeting all its residents. I also genuinely can't wait for Brock and Lyndie's story which is next. I think they both truly deserve a happily ever after. So all in all while I liked Can't Let Go it wasn't my favourite read.