Review- Wrong to Need You by Alisha Rai

He wasn’t supposed to fall in love with his brother’s widow…Accused of a crime he didn’t commit, Jackson Kane fled his home, his name, and his family. Ten years later, he’s come back to town: older, wiser, richer, tougher—and still helpless to turn away the one woman he could never stop loving, even after she married his brother.Sadia Ahmed can’t deal with the feelings her mysterious former brother-in-law stirs, but she also can’t turn down his offer of help with the cafe she’s inherited. While he heats up her kitchen, she slowly discovers that the boy she adored has grown into a man she’s simply unable to resist.An affair is unthinkable, but their desire is undeniable. As secrets and lies are stripped away, Sadia and Jackson must decide if they’re strong enough to face the past...and step into a future together. 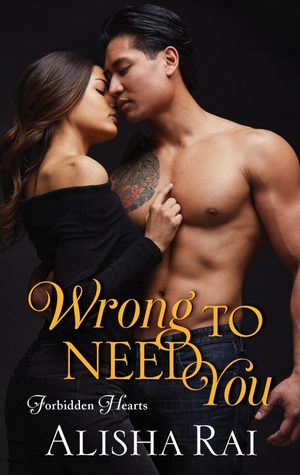 I actually picked up the first book in the Forbidden Hearts series on a whim. I was just extremely curious to see what the story would be like and then I kicked myself for not having picked up an Alisha Rai book before. Wrong to Need You is the second book in the series but each book follows a different couple and can easily be read as a stand alone. I very much enjoyed Wrong to Need You.

This is the story of Sadia and Jackson. Let's start with Jackson. Jackson's family was once upon a time a well known family who owned a grocery chain. But after unforeseen events they lost everything. Jackson was accused of a crime he did not commit and so he fled. But now he's back and still hopelessly in love with his brother's widow. I found Jackson's character to be unique. He was a strong and silent guy and he really was very shy.

Then we have Sadia. Sadia Ahmed is trying to cope after he husband's death. She's trying to be the perfect mother to her son and the perfect sister. I really liked Sadia. She was a strong woman who was trying to juggle multiple things at once. She only wanted what was best for her son. When Jackson comes back to town Sadia wants her best friend back. But Jackson's changed and so has she.

I loved Jackson and Sadia together. They were best friends since their childhood and even though years had passed they still understood each other effortlessly. The best part about Alisha Rai's books is that she writes diverse characters seamlessly. I loved seeing Jackson's Asian heritage along with Sadia's Muslim one. The relationship was obviously at the forefront but family ties were given just as much importance.

This was definitely a slow burn romance. Sadia and Jackson both had healing to do. I loved how patient and kind Jackson was with Sadia. Sadia's kid was super cute too. I loved seeing Nicholas and Livvy finally being happy together and I cannot wait for Evie's book next. If you enjoy intense friends to lovers romances with loads of family drama thrown in definitely give Wrong to Need You a shot.