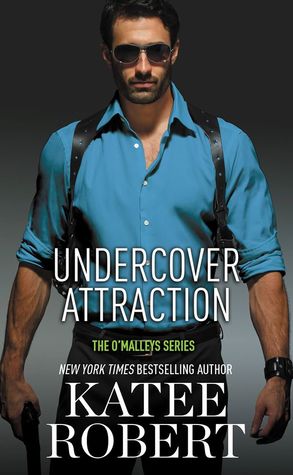 "A worthy addition to a sexy series." -- Publishers Weekly

Scandal. Wealth. Power. Seduction. Welcome to the world of the O'Malleys.Ex-cop Charlotte Finch used to think there was a clear line between right and wrong. Then her fellow officers betrayed her, and the world is no longer so black and white. Especially when it's Aiden O'Malley, one of the most dangerous men in Boston, who offers her a chance for justice. The only catch: she'll have to pretend to be his fiancée for his plan to work.Aiden can't afford to let anyone see the man behind the mask. To run the O'Malley empire, he has to be cool and controlled at all times. But the moment he meets Charlie, they're playing with fire. Her slightest touch is enough to send him over the edge. At first their "engagement" was a way to eliminate his enemies. Now he'll do whatever it takes to keep her safe-- even if he has to destroy his own family to do it.

Undercover Attraction by Katee Robert is the fifth book in the O'Malley series. I have been following this series right from the beginning and I have to say that I am invested in most of the characters and their lives. This series follows the O'Malley siblings as they navigate through their love lives while keeping a hold on their empire. The O'Malleys are basically a crime family who are trying their best not to lose control of Boston.

Undercover Attraction follows the story of Aiden and Charlie. Aiden is the head of the O'Malley empire. He is now the head of the family and has to make decisions which suit the family best. We'd met Aiden in the previous books and he totally came off as uncaring. But here we get to see that the stoicism is just a facade. He is trying to make the best out of a horrible situation but he knows he is putting a strain on the bonds with his siblings. While Aiden was not my favourite, I understood him more clearly in this book.

Then we have Charlie. Charlie is an ex-cop. She was betrayed by he fellow officers and now even her father doesn't believe in her/ When Aiden comes up with a proposal which has Charlie pretending to be his fiance she is surprised to say the least. But Charlie has her own motives. I liked Charlie. She was a strong woman and she knew what she was doing. She actually saw beneath Aiden's mask and she couldn't help but fall for him.

Charlie and Aiden's relationship starts off as a business relationship but there is no denying the attraction between them. I liked how honest they were with each other and there was no unnecessary coyness. They were both responsible adults who wanted to take care of their family and loved ones.

I also really liked how Charlie made an effort to reach out to Aiden's siblings to repair his relationship with them. I loved seeing all the previous couples and how they were doing. This book also moves Keira and Dimitri's plot forward and I am really looking forward to their book. More than I expected at first. Undercover Attraction was a good read for me. 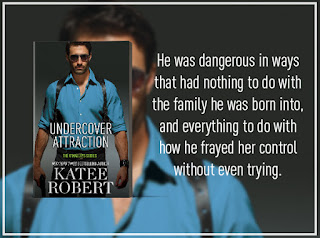 Katee Robert is a New York Times and USA Today bestselling author who learned to tell stories at her grandpa's knee. Her novel The Marriage Contract was a RITA finalist, and RT Book Reviews named it "a compulsively readable book with just the right amount of suspense and tension." When not writing sexy contemporary and romantic suspense, she spends her time playing imaginary games with her children, driving her husband batty with what-if questions, and planning for the inevitable zombie apocalypse.

Win 1 out of 10 copies of Undercover Attraction!