Book Spotlight- Against All Rules by Summerita Rhayne

Hi, guys! I am glad to spotlight the book, Against All Rules by Summerita Rhayne. The author has kindly provided us with a post that will give you some information about the book. Let's see what's in store then!

BOOK SPOTLIGHT
AGAINST ALL RULES
By
SUMMERITA RHAYNE 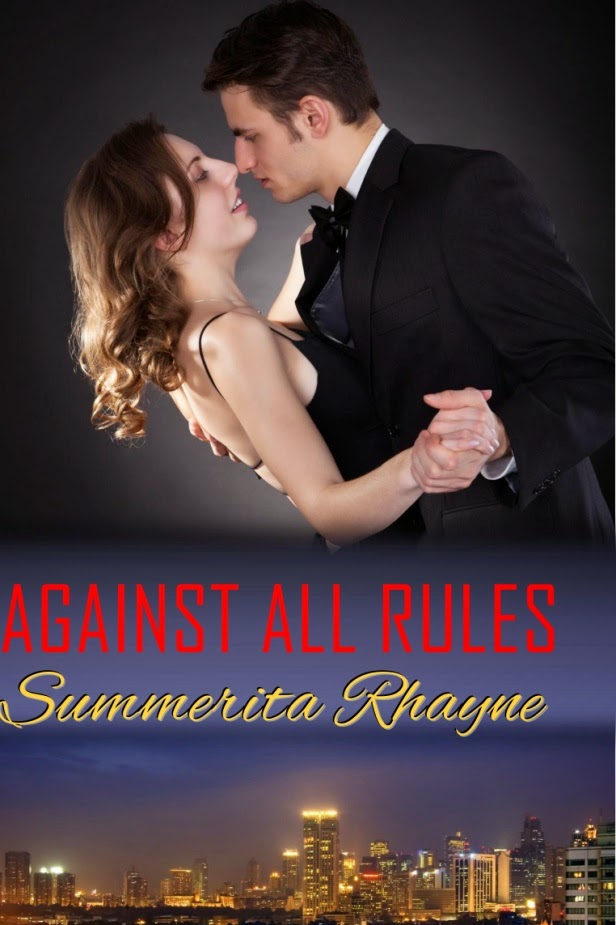 The efficient PA out of her depth...
Samara knows getting attracted to Tahir is like asking for trouble. Not only is he her boss but he's got divorced recently and has sworn off any commitment. Short term is not on her list but temptation has never been stronger...
The man who doesn't have faith in rainbows anymore
Tahir doesn't believe in enforcing a code of conduct he cannot follow. But Samara might just make him make an exception! An affair at the office might seem a solution to his troubles but how can he avoid treading uncharted territory...?

Against All Rules
...when fire is set, it's hard to avoid the blaze...

Buy the ebook at:

Coming into her office to ask if everything was ready, Tahir stilled as his gaze found the woman with her neck arched back in abandon in the chair. What the...his jaw went slack focusing on the darting tip of a tongue moistening soft pink flesh and the expression of pure sensual enjoyment on her face.
This wasn’t his usually staid and prim PA. Muscles clenched low in his body witnessing the sensuous slide of that tongue tip. Like he’d wandered into the live filming of some erotic edgy scene. It only needed her hair unconfined and the prim buttons on her top loosened for the picture of sexy siren to be complete. With her head thrown back like that and her chest thrust forward, full curves straining the buttons, she wasn’t less than a siren now. His gaze moved back to the promise of her lush parted mouth and it required no imagination to picture the feel of it beneath his, to picture capturing that errant tip... He inhaled. Blood rushed through his body at double the speed, surging strategically southward.
That kiss he’d shared with Samara had been a blindingly white ray of light piercing the darkness he’d been sunk in that day. Something had reached into him and pulled him out of the abyss. He’d been jolted to discover his cool PA was capable of such a passionate response. But there was more. Something he couldn’t name nor wanted to. He just wanted to put it behind a door and lock it. He didn’t want to gaze into the widened eyes as he had that evening and see the dawning awareness of desire, her body going hot at his touch.
Damn. Shouldn’t he have forgotten these things? Maybe it had been his mind playing tricks on him.
He’d been all set to put her straight. He didn’t want the calm of his workplace disrupted by anything and it wasn’t with pleasure that he’d looked forward to the talk the next day. She’d jumped in assuring him she was eager to put it behind her. Exactly what he should have been happy to hear. His work environment restored to order.
Should have been.
But wasn’t...

Samara became conscious of something different in her surroundings and sat up, guilt flooding her skin with warmth as she saw Tahir looking at her from his six foot vantage point, narrowed brown gaze focusing on her face. The dark brows lifted sardonically, his well shaped mouth with that velvet sheen it had, curving oh so slightly.
‘I – I was just...’
She stopped, unable to explain and unable to decipher why she felt the temperature of the room increase till a wave of heat bounced around her body.
He stood feet apart, every inch the inflexible, demanding boss man that he was. He was also jaw dropping handsome, looking like a honed and toned version of a male deo model. Forget the chocó, I could settle for a bite of that anytime. That well shaped mouth, with a fuller sensual lower lip, dark eyes, the colour of ground coffee, thickly lashed. Those spikes, he gelled his hair into as a concession to trend. No wonder women chased him any and every chance they got.
‘I don’t pay you to indulge your time fantasizing in my office.’ He ground out, a curt edge to his deep voice, his eyes still narrowed on her face.
She almost did a double take, wondering if he’d heard her thoughts but he was referring to her mooning pose in the chair.
‘I wasn’t!’ Indignation made her voice rise a notch more than its usual even tenor.
‘Whatever.’ He dismissed with a flick of his fingers. ‘Is everything ready for the meeting with the Guptas?’
‘Of course.’
‘Then let’s go. There’s a land deal to be made.’
He went back inside and took his coat from the back of his chair to shrug into it. Against her will she followed the movement, the stretch and ripple of muscles under the powder blue of his shirt. Despite the desk job, he managed to keep himself athlete fit, partly by playing football. She knew he had a game once or twice a week. Maybe he visited the gym at other times. God knew when he had the leisure. He was at office sometimes before her and she mostly came in at eight.
Didn’t his lady friends mind?
The errant thought rolled through her mind and molten shame poured into her, heating her cheeks. Conscious of his regard again fixing on her, she hurried off to instruct the helper to deliver things to the car.
She came back to find him by her desk.
‘Well?’ A dark eyebrow lifted to question her hesitant pose. He was standing too close and she had to get her bag from the desk. She waited for him to give her space as he did usually but he wouldn’t move. How had he got to be so aggressive? Almost as though he wanted to be in her way. Biting her lip she reached across to pick up her oversize bag.
They didn’t touch so why was her pulse going wild? Face it, Samara. You’re a sucker for the guy. Another inner voice argued. I work for the man, damn it!
‘Ready to move? Has your mind got back to work or are you still dreaming of your lover?’
She could only stare at him for the unexpectedly snide tone of the comment. ‘What do you mean by that?’
He shrugged, ‘What else am I supposed to think? You looked like you were reliving some secret sexual fantasy.’
Her breath caught at his brashness. Tahir, so distant and formal, was saying this? ‘How can you say that?’
She’d said the words in shock but he chose to interpret differently, ‘It was pretty obvious from your expression. Lips parted. Eyes half closed. Like a woman thinking of pleasure and only that.’
Heat shot along her veins at his description. At the tone. Lazily rolling around illicit words.
‘You would know of course, what a woman thinking of ‘pleasure and only that’ looks like?’ She jibed.
‘Of course.’
Sexy and confident, his voice was filled with sensual mockery. Something that prickled across her nerves like thorny cactus.
‘Are you boasting about your sexual prowess?’
‘Are you challenging it?’
Where had this sort of talk come from, sidling into their usual mundane queries about forms and research portfolios? A challenge was in his eyes. Hooded. Watchful. Gleaming like caramelized sugar. Something dangerous and funky that she had never seen and wasn’t quite sure she wanted to but that hooked her anyway.

Summerita Rhayne loves to write sensual and emotional romance. There's no knowing when some quirky - or sometimes even not so quirky - happening in daily life might trigger her right brain and then she's off craving a new story. She loves writing characters who learn and grow and find their way out of their troubles and emotional hang-ups. Hot, sensual heroes and sassy but sweet heroines mostly fit the bill in her stories. She also believes that a touch of humor never goes amiss in a book.

She divides her time between family, job and writing - and loves winding down with music, movies and the internet!
Email her at summeritarhayne@gmail.com
Or follow via Twitter @SummeritaRhayne
Or visit the author's website.

I hope you enjoyed this post just as much as I enjoyed putting it up for you. Thank you for stopping by!

Email ThisBlogThis!Share to TwitterShare to FacebookShare to Pinterest
Labels: Against All Rules, Book Spotlight, Summerita Rhayne