Daring Daroga: Killer in the Shadows! on Goodreads

"Naam: Inspector Abhay Pandey, Uttar Pradesh Police, sheher Allahabad. If you read newspapers, naam toh suna hee hoga.
Kaam: Maintaining public order, ordering the hawaldars, patrolling in my jeep and giving rides to women in need.
Shauk: Haseeno ko bachaana, gundon aur politicians ki bajaana. Fir chhamiya party mein nachnagana. I like murder investigations the way I like my women - mysterious, complicated, and with a (killer) body.
A threat: Naina Sinha received a threatening phone call, followed by an attempt to kill her. I found Naina with a bloodstained knife at her house. Has she killed someone?
A murder: An unidentified body is found in the public toilet with Naina's photograph and a huge sum of money. Was he out to kill her?
A secret: There is a dark secret from her past that Naina is unable to remember. Does the secret hold the key to solving the case? As new secrets are unravelled, I begin to realize that everybody from her past has something to hide. This is much more than a simple murder case. Come, let's find the Killer in the Shadows!" 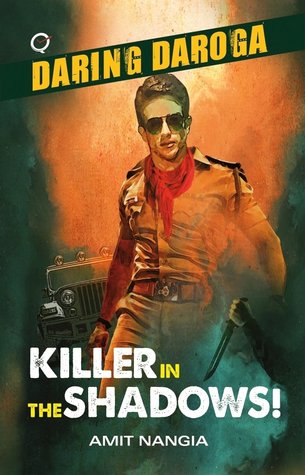 
Amit Nangia's Daring Daroga: Killer in the Shadows! is a Srishti Quickie which makes it so easy to read because the book is short and entertaining. I was pleasantly surprised by how much I enjoyed this mystery that revolves around the life of Naina, a girl who can't escape her past, mainly because she barely remembers it and inspector Abhay Pandey, a hot shot police officer who is good at whatever he does. This short story had everything from romance to action to comedy to politics and some Bollywood thrown in here and there. The latter had me annoyed sometimes, but the story was very good. Like I said, I wasn't expecting this to be such a good read, because sexism and objectification in books makes me cringe. And it did with this as well. But if I put that aside, Daring Daroga: Killer in the Shadows! was a thrilling and enjoyable read. Not much into mysteries, this one had me at the edge of my seat because I couldn't figure out who the killer was until the very end, and although as a whole, it was really mediocre, the journey was fun, and that's what matters anyway.

Catch Me? No You Can't! on Goodreads

Raja Tiwari is freshly out of jail and not for stealing hearts and killing with his looks. Audacious, handsome and dangerously charming, he is looking for a new job when he meets the suave and beautiful Silky Sinha. To add the cherry on the cake, she takes him home.
Why would a hot girl take an ex-convict, a stranger home?
Did she want something from him? Did she want him?
Wouldn't the story be too simple that way? Enter ex-cop Thakur, unruly and wild. He has a job for Tiwari which would either make him filthy rich or land him behind bars again. His plan leads to a dramatic verdict, unforeseen consequences and a web of lies and deception.
Tiwari always has an angle to everything, but he would need something more to be a step ahead in this game - assuming his own allies don't end up killing him before the police get the chance.
The question is: How far is he willing to go? 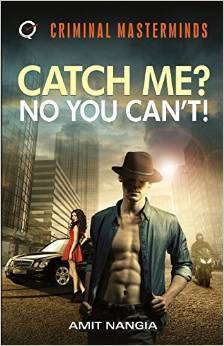 
Catch Me? No You Can't! is another mystery/ thriller by Amit Nangia that is a quick read of about hundred pages. This is the story of Raja Tiwari, who is freshly out of jail and who helps a beautiful girl from a street goon and lands in a soup. Or so it seems. Tiwari's character was very well developed and portrayed. Although the book takes place over a couple of days alone, it was fun reading about his journey and how his rather smart ass mind works. There were so may times while reading the book when I asked myself exactly what was happening, and there were also times when the book seemed very rushed, but it all came really well together in the end and ended up being a very thrilling ride. Although the use of Hindi in Indian Writing in English annoys me, Amit Nangia's humour was on point and had me laughing hard. For a story that revolves around barely three characters, this book was very entertaining and gripping. Overall, Catch Me? No You Can't! was an entertaining read whose end was really good, unique and difficult to predict.