Review- Every Day and Six Earlier Days by David Levithan

Every Day (Every Day #1) on Goodreads

Every day a different body. Every day a different life. Every day in love with the same girl.
There’s never any warning about where it will be or who it will be. A has made peace with that, even established guidelines by which to live: Never get too attached. Avoid being noticed. Do not interfere.
It’s all fine until the morning that A wakes up in the body of Justin and meets Justin’s girlfriend, Rhiannon. From that moment, the rules by which A has been living no longer apply. Because finally A has found someone he wants to be with—day in, day out, day after day.

After reading almost half a dozen books by David Levithan, I can finally identify and make out the author's writing style. Every book he writes is so unique, creative and astounding that it seems like it's a different person writing each time. Every Day was no exception. Once again, David Levithan has proved that he is the most brilliant contemporary writer of our times. And this time, he has shown that he is brilliant even when he deviates from contemporaries. He doesn't just write. He creates magic. Author Jodi Picoult is so right in her blurb for the book where she says that she didn't just read Every Day- she inhaled it.


A book like Every Day is difficult to explain. It's easy to read. Easy to understand. Easy to follow Easy to live. But very difficult to explain. Reading this book was an experience that I wish to experience every time I read a book, but that's not possible. Because the magic that David Levithan creates is unparalleled and unbelievable. He goes so deep in the head of his characters that they start to seem more real than the author himself. He doesn't just create characters- he becomes them, and in becoming them, he takes the reader along and the reader becomes the character too. And that is truly special.

I don't want to say that I was lost in Every Day. I want to say that I was found in it. I was left speechless by the end of it, and all I managed to get out was a silent but heartfelt wow once I closed it. It was so special and interesting to read about a new individual, a new personality, a new body, a new life but the same head. Every time. It never ceased to amaze me how intimate and magical it was. I thought I was reading this book because it as so well written and so well made, and it was only after I was done reading it that I realised that there's so much more to it than just that. It's a book that connects and touches people because one of the lives portrayed in the book could very well be the reader's life.

In Every Day, New York Times bestselling author David Levithan presented readers with his most ambitious novel to date: Every morning, A wakes up in a different body and leads a different life. A must never get too attached, must never be noticed, must never interfere.

The novel Every Day starts on Day 5994 of A’s life. In this digital-only collection Six Earlier Days, Levithan gives readers a glimpse at a handful of the other 5993 stories yet to be told that inform how A navigates the complexities of a life lived anew each day.

In Every Day, readers discover if you can truly love someone who is destined to change every day. In Six Earlier Days, readers will discover a little bit more about how A became that someone. 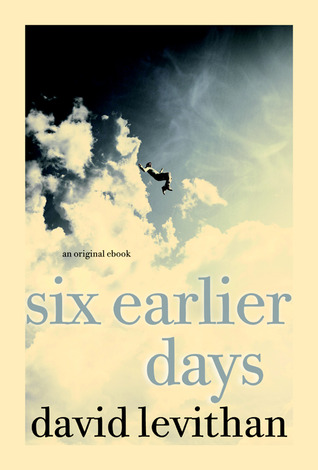 The edition of Every Day that I read came with Six Days Earlier, a prequel that has six chapters. I read the prequel before starting the book, so it gave me a glimpse into Every Day and the very unique and special life of A. It also helped me in knowing what was in store for me in the first book of the series. While on the one hand, Six Days Earlier was really nice; on the other hand, I do believe that it was slightly unnecessary, especially if I were to read it after Every Day, because the first time was sufficient. More than sufficient, it was enough. And it was breathtaking in every way possible. Giving me six chapters is great- I'll take it, but I'd rather start from Day 1 and never stop reading about A, because he is that intriguing, exciting, special, magical and unique. To sum it all up, if you are giving me more, I want everything, David Levithan; and not just peeks, I want the whole damn life of A.