My twin brother is determined to kill himself, but I won’t let him.

I just discovered the sacrifice he made for me when we were young.

Now it’s time I return the favor. This time I’ll be the one with the secret.
Psychologist Matthew Durante’s twin brother, Justin, has struggled with mental illness since their parents died in a house fire. After Justin is accused of setting off a bomb that killed an innocent woman, he lands in a maximum-security psychiatric hospital.
In the face of Justin’s unrelenting suicide attempts, Matthew grows frantic to keep him alive. And as the pieces of their past fall into place, Matthew decides bold action is his only choice, no matter the cost.
Set against the backdrop of weapons manufacturing, terrorism, and a dark family secret, Matthew and Justin fight for survival, redemption, and most of all, for each other. 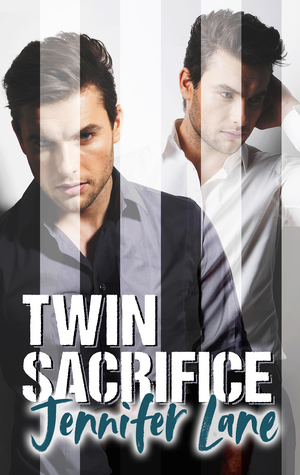 When I read author Jennifer Lane's Streamline, I really, really liked it so naturally when her sports romance series Blocked was out, I had to read all the books and I fell in love with them. When I heard about Twin Sacrifice, I had to obviously read the book because I've grown to love Jennifer's books. But when I finally read it, I was shocked and surprised because Jennifer just keeps getting better and better. I used to believe that the Blocked series is her best work but I have to take that back because Twin Sacrifice has to be her best so far. And I'm a hundred percent sure that I'll take this back when there's a new book out because that's just Jennifer. She outdoes herself every time. I have so much of admiration for the author.


Coming to the book, Twin Sacrifice is the story of 29 year old twin brothers Matthew and Justin who lost their parents when they were very young and were taken into foster care by their father's boss, Dr. Jefferson King. Along with their foster sister Kate, they have lots of childhood memories that bring both joy and pain. Suffering from mental illness since childhood as he blames himself for his parents' death, Justin is later imprisoned for planting a bomb that killed an innocent woman. His physiologist brother Matthew then decides to do something that would set everything right. Both Justin and Matthew were amazing men who just made me want to hug them and never let go, and such characters are my favourite. Aside from them, however, every other character was just as well done and brought out very strong feelings in me as a reader, so you can imagine how involved I was in the story.

One of the best things about Jennifer's stories is all of the issues that she takes up which really are very important. From abuse in Streamline to politics in Blocked to terrorism in Twin Sacrifice, it's just so interesting to read about problems that we face everyday and that are relatable. However, there is so much more to Twin Sacrifice than terrorism. Throughout the book, I just sat there wandering how Jen even comes up with such mind blowing plots and how she joins all the dots so meticulously in the end. I love it when I'm reading a book and I know what's going to happen but the author proves me wrong. Trust me, it's one of the pleasures of reading for me; knowing that the plot is unpredictable, it both intrigues and fascinates me.

There's not much else that I'd like to say about the story because this is a book that you just have to discover on your own. I found it very difficult to read at times because of the darkness and depth to it, but if like me, you like to read heavy books that make you think and that you make you pause just because something is too much to take in, then Twin Sacrifice is the book for you. This is a book about family and justice and how, in spite of everything you've been through, you can still be a good person. It's about accepting your past and using it for a better future and that is very beautiful. Books about bonds between siblings tend to make me cry, and this one did. In general, however, not many books make me cry, but when they do, trust me, they're gems. Twin Sacrifice has to be the best book of the year.

*Note: A copy of this book was provided by Jennifer Lane and Book Partners In Crime Promotions in exchange for an honest review. We thank them.