Hey guys! :)
Today I have a very interesting book up for grabs on the blog. But before that, we also have an interview with the author himself. Mohan Prasad is the author of the book called Legacy. Keep on reading ahead for the interview and giveaway! 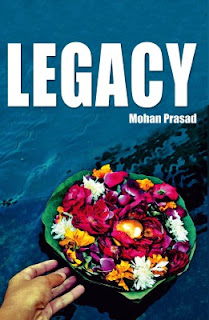 Legacy is the story of Anita and Darshan, two teenagers in love, set up in the chaotic post Independence India. Their search is on, not for something concrete but abstract, while they explore the land they love and the people they live among. But fate betrays them. Their ideologies diverge and the road forks. Love, both presence and absence of it, runs through the tale, while Indian story unfolds for a free, but confused generation.Summary: Legacy is set in post Independent India, and weaves together the stories of Darshan and Anita, ambitious rural teenagers from Bihar; Darshan's father Shankar, an RSS supporter from a freedom fighter family; and Subhash, the son of the protagonists.Darshan, proud resident of an exotic village, is inspired to leave his adventurous hostel life to join the student movement of 1975 under the firebrand Loknayak Jayaprakash Narayan. Grounded in an Anglo Indian village during the repressive Emergency, he falls in love with his free-spirited senior Anita. Wading through teenage love and exciting college adventures of 1970s Delhi, they forsake education on JP's death to explore Bihar. Disgusted by the traumatic Sikh riots and saddened by his father's death, Darshan finds a guide in a swami rumoured to be Netaji Subhash Chandra Bose. While fate turns Anita into a Naxal strategist, Darshan, seeking solace, turns into an acclaimed mystery healer.The old love sparks again while violent communal events keep shocking India. Sadly, Anita forsakes the world of Maoist violence and hypocritical civil society, sending their five-year-old son Subhash away. The estranged son, now an adult, tries to fathom his parent's lives and unfulfilled dreams while an exhausted yet optimistic Darshan entrusts the baton of social revolution to the next generation.Legacy shows how the chaotic story of 1960s to 1990s India gave rise to real heroes, though flawed in their own ways. While we keep looking for ways to improve the lives of our fellow beings, the boundary between a hero and a criminal often fades. Brief reviewsThe inspiring and exciting story of India. An incredible debut. 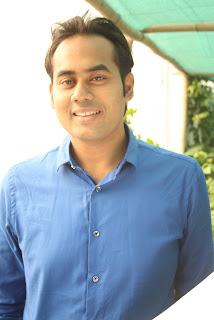 Mohan was born in a small village of Bihar adjacent to the river Baghmati. He grew up to be the Bihar ICSE topper and went to graduate from IIT Delhi and IIM Lucknow. His love for Indian as well as world history, culture and human stories led him to explore evolution of societies and revolutionary movements across the world. The only village boy in his MBA class at IIM Lucknow, he has fortunately experienced firsthand two different Indias with their similarities and differences.
He has been a regular contributor to print media through articles on Education sector and has been a speaker at many seminars. He has been associated with Manisha Mandir, Lucknow – a home for destitute girls – and has also been awarded twice by the Governors of Uttar Pradesh for his social services. With a reading habit bordering on crazy, Mohan delved deeper into Indian history - post and pre Independence. He now wants to present the story of India to a curious new generation with a fresh and interesting perspective through inspiring tales of young and ambitious individuals.

Legacy is meant for the adults (young to middle age); every patriot and curious person who is interested in knowing the story of India post independence, but finds History books not engaging enough to read. It is the inspiring and exciting story of India, as she stumbles again and again since independence, but always gets up to move on. The protagonists, Darshan and Anita, lend the readers their eyes to witness the unfolding of the story, and their lives to live vicariously in those chaotic decades. India overcomes upheavals like the Emergency, the Naxal movement, the anti Sikh riots and the demolition of the Babri Masjid, carrying along her crores of children, their dreams and their hopes. The adventurous and exciting love story of the protagonists, waving between delight and agony, is woven in this tale of an electrical circuit called society. It's a unique period epic delving into how and what has become of India in the 21st century.

My grandfather was a freedom fighter. He used to tell us a lot of stories of India of the 1940s as well as folk tales from all across the country. My mother also used to narrate stories to me and my siblings. This created in my young heart, a love for human stories with their intricacies, emotions and details. Later in life, I took to reading extensively books from different genres. In fact I would have read at least 700-800 books since my college days. For quite some time, I have nurtured this urge to present to the younger generation a glimpse of the turbulent, yet decisive times in the recent history of India. Legacy does just that. The stories almost compelled me to put it all out to the young generation in an engaging story that they can relate to. History books can be boring, but historical fiction is quite loved.

·         Are any of the characters in your book inspired by someone you know or are they complete results of your imagination?

A lot of time has been spent for primary as well as secondary research of the book. I have travelled to almost all the places mentioned. Moreover, most of my time went into talking to people from these regions to get their views on various events as well as get to know history through their eyes.
Besides, reading books on every possible topic related to the book as well as newspaper cuttings etc of those periods have helped a lot.

I would prefer physical copies. E-books are definitely the future and I have read a lot of them, yet physical copies somehow connect more. They are not abstract, but concrete. You can touch them or feel them and you can fall in love with them.

·         If you could read only one author’s works for the rest of your life, which author would you pick and why?

I would have to choose between Munshi Premchand and Gabriel Garcia Marquez. Reading Premchand saddens you, so I may have to leave him after a while but one can keep reading Marquez for the entire life.

It has to be a thick romantic comedy book, a mobile phone with solar chargeable battery and a pen. I love talking and spend a lot of time connecting with friends and relatives from all across. I love to read and can read 3-4 books in a day. And obviously I love to write as well.

Toughest criticism has come from my cousin, who also acted as my sounding board as well as proof-reader. He became critical of my mistakes and initially was even critical of a lot of my ideas and views that are in the book.
The best compliment has come from my English Writing professor at IIT Delhi who wrote on her facebook wall, “After a long time I have closed a book with a sense of regret that it is over and with a satisfaction that I have read a good book. It is unlike any written by the students of India’s elite institutions so far.”

India needs writers and thinkers, who have the zeal to inspire young minds and who can stay real with content. Back your writing with ample research. Travel around the country or just read about our people. We are a big country, one of the oldest civilizations and we have an amazing diversity. This land is full of mind-boggling stories, ready to be brought out and told to everyone, who may not have had enough opportunities to explore. Play that role.

Mohan has generously offered to give away TWO SIGNED copies by Legacy to two lucky Indian readers. All you have to do is complete the entries in the rafflecopter.

May the odds be ever in your favor!

Thank you so much guys and happy reading! :)