Review- Me Before You by Jojo Moyes

Me Before You by Jojo Moyes

Lou Clark knows lots of things. She knows how many footsteps there are between the bus stop and home. She knows she likes working in The Buttered Bun tea shop and she knows she might not love her boyfriend Patrick.What Lou doesn't know is she's about to lose her job or that knowing what's coming is what keeps her sane.Will Traynor knows his motorcycle accident took away his desire to live. He knows everything feels very small and rather joyless now and he knows exactly how he's going to put a stop to that.What Will doesn't know is that Lou is about to burst into his world in a riot of colour. And neither of them knows they're going to change the other for all time. 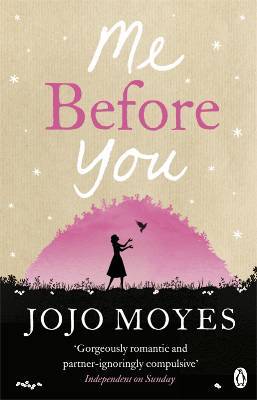 When I take almost a month to finish just one book, it either means that I read it just for the sake of it or that I love it so much that I take my time with it because I don't want it to end and because I don't just want to read the book; I want to devour it. Thankfully, Me Before You falls in the latter category. Who am I kidding? I knew all along that I would end up falling crazily in love with this cute and catastrophic story. My March 2016 was spent with Me Before You and what a journey it has been!

There is nothing about Me Before You that I have to say that hasn't been said before, but let me just get one thing straight- this book isn't really sad. I would say it is rather joyful and cheerful because it's not the destination, but the journey that counts, right? And this was one tear-jerking, yes; but completely colourful and celestial ride. There is so much more to it than what meets the eye. This book is about chances and choices and it shows its philosophical colours in a very mature and muted way. So if you really think about it, it isn't really sad, but just very raw and real.

Yes, it is a huge book, but it is totally worth it. There were absolutely no flaws in author Jojo Moyes' writing, character building and storytelling. Everything was perfect and there is nothing that could have been done better. This book had both laughter and tears and it was shown in the most adorable, gut-wrenching yet heart-warming way possible, making Me Before You a very simple and still sophisticated book, because that writing! That writing was so English, and so beautiful and so perfect.

Without a doubt, I would recommend this book because it teaches you compassion and humanity. At least, that's what it taught me. All those kickass heroines are awesome, but Louisa was the true heroine because in no world can I imagine myself in her selfless and giving shoes. I loved Will the most though because he was true. This book has been a wonderful journey that I was so glad I devoured.