Qiara Rana will do anything to save her mentor and their non-government organization from ruin. Even if it means visiting the city she had vowed never to return to. But within a few hours of landing in New Delhi, she is being chased by a gunman and is a potential suspect in the murder of a high-profile businessman.
The only person she can turn to for help is Kabir Shorey, the man who stood her up ten years ago. Past and present collide in a deadly plot of crime and greed that moves from the cosmopolitan streets of Delhi to the bazaars and villages of Rajasthan. 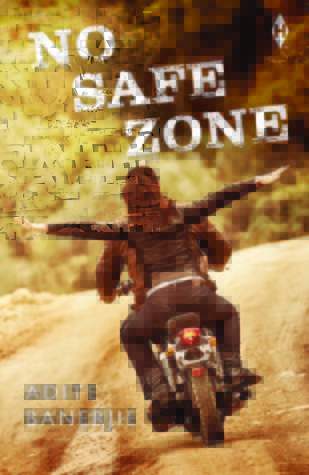 I really enjoy Adite Banerjie's writing style. I have read and loved her previous two books, The Indian Tycoon's Marriage Deal and Trouble Has a New Name. So I was super excited that she had a new book coming out. No Safe Zone is a little different from her previous works as it is a romantic suspense but I enjoyed it just the same.

Qiara is our heroine. She works for a non government organization. She is passionate about her work and truly cares about the girls whom the organization helps. When the organization is in trouble, Qiara goes to Delhi, a place she had vowed not to return to and gets caught up in a situation which is way bigger than she imagined. I really loved Qiara. She was sweet, independent and modern woman. Qiara knew what she wanted and she was loyal to the core.

Kabir on the other hand has been working for an Intelligence Agency. He has to find the culprit behind the murder of a high-profile businessman and try to solve the mystery behind a crime ring which sells young girls. What he doesn't expect is to run into Qiara, literally in the midst of all this. I liked Kabir. He was a hero who tried to be practical but failed spectaculary where all things Qiara were concerned.

I really enjoyed the chemistry between Qiara and Kabir. They had history and they shared an intimacy. They both had a connection but events in the past had brewed misunderstandings. To say that things were complicated, is an understatement. But I enjoyed the way Adite pens and builds the rapport between the two. I liked being in Kabir's head just as much as Qiara's.

Paired with all the intense times happening with Kabir and Qiara is a mystery they both need to solve. There are many unknown factors and slimy players in the game. It is safe to say that No Safe Zone is filled with action and a few twists and turns. All in all I really enjoyed No Safe Zone. If you are looking for a romance with dashes of suspense and thriller elements with a wholly satisfying ending this is the book for you.

*Note: A copy of this book was provided by the author/publishers in exchange for an honest review. We thank them.