Three Sisters introduces twenty-six-year-old amateur sleuth Emily Castles in this popular new British mystery series.
Emily receives an invitation to a party in a large house at the end of her street, hosted by a mysterious troupe of circus performers. She accepts, despite her misgivings, because her dog has died and she needs cheering up. But when she witnesses a murder in the midst of the surreal entertainment, no one will believe what she has seen. Is Emily befuddled with grief at the loss of her pet? Or has something wicked happened in plain sight of all the party-goers? Emily and her eccentric neighbours attempt to discover the truth in a charming story that will have you giggling at every funny line.
Readers of M C Beaton or Alexander McCall Smith will enjoy discovering a new mystery author.
Chosen as a “Favorite Book of the Year” by Elizabeth at The Frugal Ereader.
This short mystery is a standalone story set in London. The Emily Castles mysteries can be read in any order, but if you’d like to read them in the order they were written and published, this is the chronology:
#1 Three Sisters (Emily Castles Short Mysteries)
#2 Showstoppers (Emily Castles Short Mysteries)
#3 Invitation to Die (Emily Castles Mysteries)
#4 Beyond Belief (Emily Castles Mysteries) 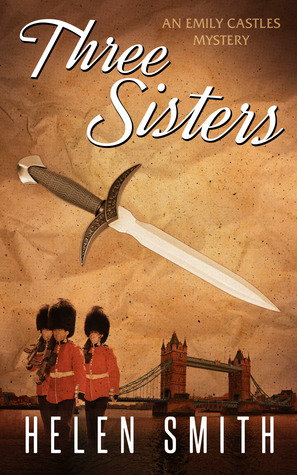 
Previously, I have read a couple of short stories by Helen Smith, and they ended up being very interesting. Same goes for Three Sisters as well. It was a very interesting read that had a mysterious aura surrounding it since the first page and went on till the end of the story. Being a novella, the story was very well thought of and put down in a minimum number of pages.

Three Sisters is a novella in the Emily Castles Mystery series. In this one, Emily has recently lost her dog. As she is still accepting the permanent absence of her feline half, she is invited to a communal party for which she makes a rather passable dish of potatoes. At this gathering, there is food, music, performances and art in all forms.

Amongst these performers are twin sisters ZiZi and Zsa-Zsa who play with knifes and come from a Hungarian family that specialises in the same. There is also Emily's friend Midori who goes by the name Hana-bi as the DJ for the night. Just as Emily is cleaning up her plate after having food with a handsome guy named Joe, she sees Midori collapse. A series of unexpected and freaky events later, Emily is determined to find out the mystery behind all acts with the help of another neighbour, Dr. Muriel and Chirs, another bloke.

Not the biggest fan of the novella, I still felt it was quite entertaining as it kept me wanting to know more in the tiny amount of time it took me to finish the story, which was very decent. The writing was nice as well, and the mysterious, almost alarming aura made it fun but gave me goosebumps as well. This is a really great novella for the occasional short length mystery read for when one is in the mood for that.