A quintessential Bengali anglophile, Aabir Mookerjee, is back from Oxford and can often be spotted basking in the comfort of colonial clubs or pottering around his restaurant, E&B, whose chocolate mousse has been garnering all the attention.
Troubles begin when The Mad Hatter opens across town and its attractive young proprietress shows a knack for concocting sweetmeats. Meanwhile, Aabir’s mother and the family priest unite to find him a ‘suitable’ bride. His monosyllabic sister won’t help and his incorrigible friend is too much the flagrant Lothario to be depended upon. Soon, the easily disoriented Aabir finds himself swamped by more ladies than he can handle.
Perhaps the only person who can bring things to a head is his dead grandmother, who watches over the family with an eagle eye from her unearthly abode on the coconut tree.
Hugely engaging, with bountiful laughter, read along to know how Aabir fares, even as he inches closer to the best dessert he can get his hands on and a romance he hadn’t bargained for.
Psst: The reader runs the risk of unappeasable hunger pangs, which is not to be held against this lip-smackingly tasty book. 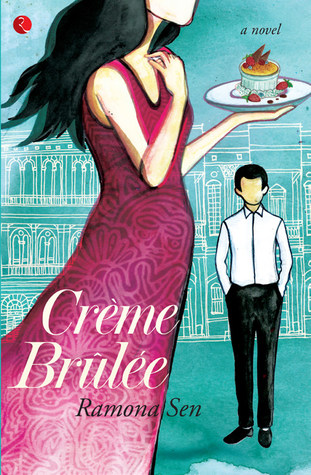 I LOVE desserts, especially anything chocolate so how was I supposed to pass up a book called as Crème Brûlée, right? It was a no brainer. Crème Brûlée by Ramona Sen is a book set in the back drop of Calcutta with a typical bengali family with all its quirks and eccentricities. Credit should also be given here to Urvashi Suraiya for all the cute drawings in the book which made it even prettier. The book mostly focuses on Aabir Mookerjee and his way of dealing with the people surrounding him. It is safe to say that Crème Brûlée was an enjoyable read for me.

Let's start with Aabir. At first Aabir comes off as an uptight man who is no fun and always bothered with the unnecessary details. As we read ahead we can see that he is all that but he is also so much more than that. His personality has many nuances. Aabir runs an eatery called as E&B or Eggs and Bacon and as a foodie himself he is proud of what he has accomplished with E&B. The chocolate mousse is what E&B is famous for but a new place called the Mad Hatter opens up giving E&B some competition.

I really came to like Aabir and his quirks by the end of the book. Aabir was a character in himself but even more funny were his family and friends. Aabir's mother was hell bent on marrying him and came up with several plans devised to help or rather force him to tie the knot with any girl. Then we have Thakuma, Aabir's dead grandmother who watched over the entire Mookerjee clan from top of the coconut tree. I also really enjoyed the monosyllabic Aatreyee who is Aabir's sister. The servants working for the Mookerjee's also have their own part to play.

Aabir's friend Rana Raina is the one who pushes Aabir to be more outgoing. I loved the bond between Rana and Aabir. They were childhood friends and even if they were complete opposites their friendship was strong. Now with all these multiple threads going on let's not forget the romance. There is some with a certain owner of The Mad Hatter.

I loved how Kimaya and Aabir first started off as friends. Kimaya was very cute with her quirky accessories which never failed to amuse and shock Aabir. There is also the meddling Purohit who has intentions of his own. With so many characters there is a lot of commotion and chaos but always in a good way. With delicious desserts and enjoyable characters Crème Brûlée turned out to be an entertaining read.

*Note: A copy of this book was provided by Rupa Publications India in exchange for an honest review. We thank them.