In this fascinating all-female drama, Yukio Mishima endeavors to explain the riddle of why the Marquis de Sade's wife, who had remained loyal to her husband throughout the years of his wild debaucheries and during his lengthy imprisonment, decided to sever their relationship once he had regained his freedom. "This play might be described as Sade seen through women's eyes," writes Yukio Mishima in his postface to the drama. "I was obliged to place Madame de Sade at the center and to consolidate the theme by assigning all the other parts to women. Madame de Sade stands for wifely devotion; her moth, Madame de Montreuil, for law, society and morality; Madame de Simiane for religion; Madame de Sans-Fond for carnal desires; Anne, the younger sister of Madame de Sade, for feminine guilelessness and lack of principles...."
Through its subtle dialog and finely drawn human contrasts, 'Madame de Sade' is a convincing evocation of period. Although the Marquis himself never appears in the drama, his presence is all pervasive.

This English text is by Donald Keene, a foremost translator of modern Japanese writing. The photographs are of scenes in the original Japanese production, staged in Tokyo. 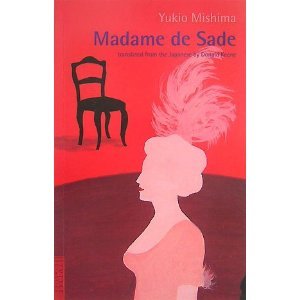 I came across Madame de Sade at a local bookstore when they were having a huge sale. Something about the cover, the title and the synopsis really fascinated me, and so I decided to pick it up. Having sat on my shelf for almost a year and a half, I finally decided to read the book. Madame de Sade is originally a Japanese play written by Yukio Mishimi, and I read the English translation done by Donald Keene.


The themes that interested me most when I bought his book were the fact that a Japanese writer wrote a play set in France and that it focused on feminism. I was pursuing my French Masters in literature with a research on feminism at that time, so I thought it to be the perfect fit. But even though I didn't get to the book back then, I'm sure I would've enjoyed it just as much as I did now.

Madame de Sade actually follows Marquis de Sade, who never once appears in the play, but is somehow always present because all the women in it only talk about him. So we have his wife Marquise (translated as Madame for the English readers) de Sade, who is the epitome of a devoted wife until she learns to accept her husband for who he is. And then we have her mother, her sister, their maid, and two more women, who, in my eyes, were the most integral characters. From the summary, every woman of the five important ones represents something and eventually through the course of the play, it becomes very evident.

I thought that the various themes were taken up brilliantly and uniquely in this play keeping both the individual mind-set and the socio-political scenario of France in the late 1700s in mind. So while on the one hand, there was a more subdued but strict atmosphere during the first two acts; on the other hand, there was also a more casual yet concerned one in the third act which takes place after the French Revolution. While the third act did seem to drag for a bit too long, the first two were very well made and thoroughly enjoyable.

This play is just beautifully done and it shows in the form of the crisp and intelligent writing. My copy also came with a few pictures here and there of the actual theatre performance by an array of wonderful Japanese actresses and that really helped me imagine the play better.  A true portrayal of the way society works, this play, in a subtle manner, gives a great glimpse into the way we are made to think, and that was the most wonderful thing about it.