New York Times and USA Today bestselling author Katee Robert continues her smoking-hot series about the O'Malleys-wealthy, powerful, and full of scandalous family secrets.
Greed. Ambition. Violence. Those are the "values" Olivia Rashidi learned from her Russian mob family-and the values she must leave behind for the sake of her daughter. When she meets Cillian O'Malley, she recognizes the red flag of his family name . . . yet she still can't stop herself from seeing the smoldering, tortured man. To save her family, Olivia sets out to discover Cillian's own secrets, but the real revelation is how fast-and how hard-she's falling for him.
Plagued by a violent past, Cillian is more vulnerable than anyone realizes. Anyone except Olivia, whose beauty, compassion, and pride have him at "hello," even if she's more inclined to say good-bye to an O'Malley. While his proposal of sex with no strings seems simple, what he feels for her isn't, especially after he learns that she belongs to a rival crime family. Cillian knows that there is no escape from the life, but Olivia may be worth trying-and dying-for . . . 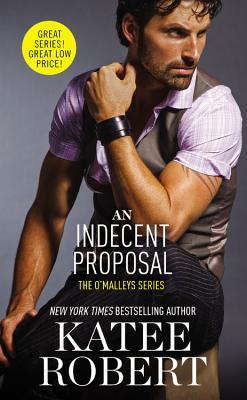 An Indecent Proposal by Katee Robert is the third book in her O'Malley series. Though I don't necessarily think it is needed to read the first two books in the series as each can be read as a stand alones, you do get a back ground of what's going on if you have read the previous books. We also to get to see characters from the previous books so that is always there. For me, I think An Indecent Proposal was the weakest book in the series to date. It was not bad by any means but I just couldn't get into it quickly.

This is the story of Cillian. Cillian has been the most affected by the death of the youngest sibling in the O'Malley family. No one realizes how much he is suffering or at what a vulnerable state he is currently in. The only solace Cillian finds is when he is at the bar -not drinking- but with Olivia. I liked Cillian. He had accepted the position in the O'Malley family and was finally taking responsibility for his actions. The only one who saw that clearly was Olivia.

Olivia Rashidi has had a horrible past. She wants nothing to do with the O'Malley family or with anyone actually. She wants a peaceful life for her daughter and she is working hard to achieve it. Olivia was not an easy heroine to like at first. She stays away from Cillian for obvious reasons but there are a lot of mixed signals going on. But I liked how she cared for Cillian.

Katee Robert definitely knows how to write romance but I didn't find the chemistry between Olivia and Cillian to be as intense as the previous couples in the series. I know, I probably shouldn't be comparing because each couple is different but I can't help it. I just wanted a few more solid conversations between the two of them to make it more believable.

I also wished we'd gotten to see more of the bond Olivia's daughter, Hadley and Cillian formed. We definitely didn't get enough of that cuteness. We do get to meet the remainder of the O'Malley clan in this book. I am especially curious to see how Sloan's story will go as that thread has already begun to unravel. I also desperately want happy endings for Aiden and Keira. They deserve it. All in all An Indecent Proposal was an okay read.

*Note: A copy of this book was provided via Netgalley by the authors/publishers in exchange for an honest review. We thank them.