To celebrate the rise of their new queen, three goddesses of the moon created three stars, one of fire, one of ice, one of water. But then they fell from the sky, putting the fate of all worlds in danger. And now three women and three men join forces to pick up the pieces…
Sasha Riggs is a reclusive artist, haunted by dreams and nightmares that she turns into extraordinary paintings. Her visions lead her to the Greek island of Corfu, where five others have been lured to seek the fire star. Sasha recognizes them, because she has drawn them: a magician, an archaeologist, a wanderer, a fighter, a loner. All on a quest. All with secrets.
Sasha is the one who holds them together — the seer. And in the magician, Bran Killian, she sees a man of immense power and compassion. As Sasha struggles with her rare ability, Bran is there to support her, challenge her, and believe in her.
But Sasha and Bran are just two of the six. And they all must all work together as a team to find the fire star in a cradle of land beneath the sea. Over their every attempt at trust, unity, and love, a dark threat looms. And it seeks to corrupt everything that stands in its way of possessing the stars… 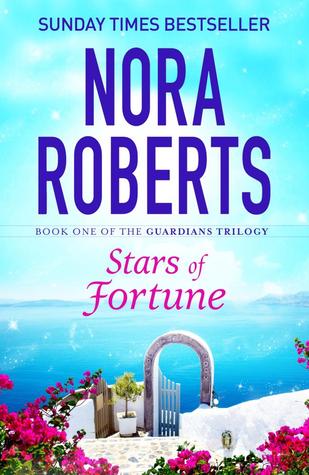 This is not my first Nora Roberts read. As everyone and their mother knows, Nora Roberts is the queen of romance and so I have read a series or two by her. And for the most part I like the way she writes. Her stories are solid. Stars of Fortune is the first book in Nora Roberts' Guardians Trilogy. This is not a contemporary romance like any other. It leans more towards the paranormal side with dashes of magic and gods and mythology. While I didn't love Stars of Fortune, it was still a good read.

This is the first book in the series so Nora Roberts does lay the ground work for all the six characters who are a part of the trilogy. Like I said before this book is filled with magic and myths and gods and goddesses so time is spent explaining all of that too. But with it we also have a nice romance going on between Sasha and Bran.

Sasha is an artist. For about a year now she's been having dreams and nightmares about five other people along with her who are supposed to be on a quest to find the stars. Sasha is haunted by them but she is compelled to follow her instincts. I liked Sasha as a heroine. She seemed fragile and vulnerable in the beginning but she came into her own. She finally gained confidence in herself and in her powers.

Bran on the other hand is a magician. Literally. He is just as intrigued by the whole thing which is going on in their group of mismatched people. But Bran is far more confident of himself as well as the connection he feels towards Sasha. I liked Bran and Sasha together. Obviously the book is equal parts romance and equal parts adventure with the quest so the focus is not completely on them.

Some of my favourite parts of the book were when all six of the characters were together. I love that we are able to see the start of relationships that are sure to form strong bonds in the future. Also, its quite easy to see the next two pairings while the adventure continues for these six. I am curious to see how Sawyer and Annika's book will go. Doyle and Riley are tough but the toughest fall the hardest. Anyways, though not brilliant, Stars of Fortune was a good read. Yes, it was predictable but predictable is not always bad, it can even be comforting at times. If you are a Nora Roberts fan give this one a shot.