Review: The Hooligans of Kandahar by Joseph Kassabian

“Not Every War Story is Heroic”During the peak of the Afghanistan War, a group of soldiers is dropped by helicopter into the remote mountains outside of Kandahar City. Mismanaged and overlooked by command, the squad must rely on each other to survive.Their mission is to train and advise the Afghan National Police and help rebuild the country of Afghanistan. The Afghan Police station they are assigned to live in is falling apart and disease-ridden. Many of the police officers they are supposed to train are Taliban sleeper agents or the family of Taliban fighters. The ones that aren’t are often addicted to drugs, illiterate, or smuggling child slaves.The squad is led by Slim, a Staff Sergeant in his late twenties who has so many mental issues his insanity is his most dominant personality trait. An alcoholic with a penchant for violent outbursts against both his own soldiers and the Afghans, he is more comfortable at war than at home.Joseph Kassabian is the youngest and most junior fire team leader in the squad. He’s charged with leading a team of soldiers not even old enough to drink. He himself is only 21 years old. As a combat veteran from previous deployments with four years in the Army, he assumes he has seen it all. But he has no idea how bad things can get in war-torn Kandahar.In the birthplace of the Taliban, some men lose their lives, some lose their sanity, and others their humanity. They are The Hooligans.Acclaimed for its humorous, grim, sardonic, yet honest recollection of the Afghanistan war Hooligans of Kandahar is a Jarhead, and The Hurt Locker, meets I Hope They Serve Beer in Hell, and Fear and Loathing in Las Vegas.You’ll love The Hooligans of Kandahar if you like reading:Military memoirsWar storiesAfghanistan war storiesCritical accounts of Afghanistan warCollege or satirical humour 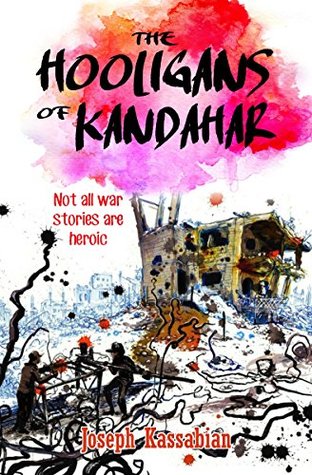 Release date: August 9th 2018
Published by: TCK Publishing
Page numbers: 258
REVIEW:
It is not a secret that I like to read books set in Afghanistan and Pakistan. Previously, I have read books about the US Marine Corps deployed in Afghanistan. I have read about the pre and post mission which focuses on the anxiety that they face before going to another country and the depression they suffer from once they’re back home. The Hooligans of Kandahar is such a unique non-fiction read, in that it focuses on exactly what goes on when these brave hearts travel miles and miles to remove the Taliban from power.
This is by no means a book for the faint hearted. With incidents that will leave the reader feeling heartbroken and shattered which is easy because we’re just reading about it, I found it very difficult to imagine someone go through what Joseph Kassabian went through, I don’t even want to imagine what the author must have felt while penning down all the devastating experiences that are bound to leave one feeling lost and destroyed. Nonetheless, as far as this seems appropriate, this is one astonishingly put down work.
This memoir took me a very long time to get into mainly because I am super slow with e-books, but it is interesting, engrossing and will completely blow you away with everything that you get to know about humanity, service, brotherhood, patriotism, terrorism and life in general. I did find the book to be too long but as I got to the end, I wanted to know more because the narration made me believe I was part of the superb platoon.
If like me, you like to explore books set in Afghanistan, this one gives a whole new perspective from the eyes of an outsider who is there for work yet feels belonged. A sad but true story, The Hooligans of Kandahar broke and mended my heart at the same time.
*Note: A copy of this book was provided by TCK Publishing in exchange for an honest review. We thank them.