Rylie's been bitten.
She's changing.
And now she has three months to find a cure before becoming a werewolf... forever.
Rylie Gresham hates everything about summer camp: the food, the fresh air, the dumb activities, and the other girls in her cabin. But the worst part is probably being bitten by a werewolf. Being a teenager is hard enough, but now she's craving raw flesh and struggles with uncontrollable anger. If she doesn't figure out a way to stop the transformation, then at the end of summer, her life is worse than over. She'll be a monster. 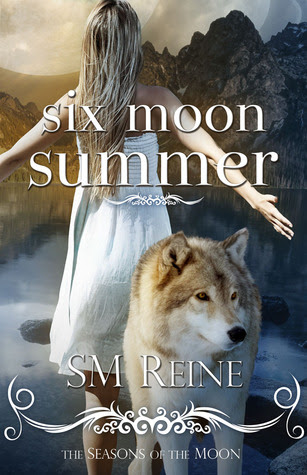 Being a big fan of werewolves, I was pretty eager to get started with Six Moon Summer the moment I bought my Kindle copy of the book from Amazon.
Rylie's parents are about to legally finalize their divorce and decide to send their daughter to Camp Silver Creek for the summer. Reluctant to go, Rylie has absolutely no idea what awaits her at Camp. As a character, I found it both easy and difficult to relate to Rylie. She is a nice girl, though quite rebellious, which is understandable. What I really liked about her is that she maintains a journal. It was great to read some tiny snippets from her diary. She wanders alone in the forest and that's when she gets bitten by a werewolf. It was plain mesmerizing to read about her transformation and even the changes she starts noticing in herself after the bite. I especially appreciated the concept of keeping the change from man to wolf depending upon the phases of the moon, which made it so much more authentic, slightly creepy and beautiful, all at once. There's a complicated relationship between Rylie and werewolf hunter, Seth. I hope they both get their happily-ever-afters in the books to come. I also liked that the set-up was at Camp. I thought that made the story more believable and simple. My most favorite character, however, was the Silver Creek Camp Counselor, Louise. She was so sweet and supportive.
Six Moon Summer was a fascinating book, full of mystery and charm! I would definitely recommend it. I can hardly wait to get started with the next book in the Seasons Of The Moon series.