Welcome guys, to another super cool giveaway that Janhvi and I have for you!
After the overwhelming response we got for The Immortals Of Meluha giveaway, we realised that there are tons of fellow Indian book lovers like us out there and it would be great to do more IN only giveaways.

This time, all thanks to Arup Bose @ Srishti Publishers & Distributors, TWO lucky Indian readers have the chance of winning signed and personalized copies of The Secrets Of The Dark, a fantasy novel by author Arka Chakrabarti. The book was released on April 10, 2013 and it sounds awesome, so I hope y'all are looking forward to reading it! 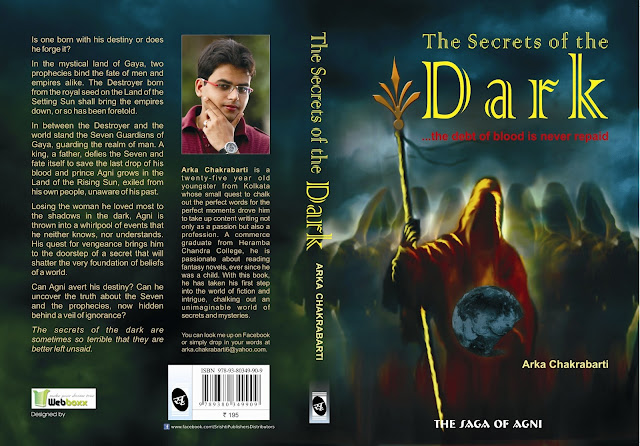 SUMMARY OF THE SECRETS OF THE DARK:

Is one born with his destiny or does he forge it?

In the mystical land of Gaya, two prophecies bind the fate of men and empires alike. The Destroyer born from the royal seed on the Land of the Setting Sun shall bring the empires down, or so has been foretold.


In between the Destroyer and the world stand the Seven Guardians of Gaya, guarding the realm of man. A king, a father, defies the Seven and fate itself to save the last drop of his blood and prince Agni grows in the Land of the Rising Sun, exiled from his own people, unaware of his past.

Losing the woman he loved most to the shadows in the dark, Agni is thrown into a whirlpool of events that he neither knows, nor understands. His quest for vengeance brings him to the doorstep of a secret that will shatter the very foundation of beliefs of a world.

Can Agni avert his destiny? Can he uncover the truth about the Seven and the prophecies, now hidden behind a veil of ignorance?

The secrets of the dark are sometimes so terrible that they are better left unsaid.

ABOUT THE SECRETS OF THE DARK:

THE SECRETS OF THE DARK ON GOODREADS

TRAILER FOR THE SECRETS OF THE DARK:

LINKS TO ORDER THE SECRETS OF THE DARK:

PLACE YOUR ORDER FOR THE SECRETS OF THE DARK AT:

Arka Chakrabarti is a twenty-five year old youngster from Kolkata
whose small quest to chalk out the perfect words for the perfect
moments drove him to take up content writing not only as a passion
but also a profession. A commerce graduate from Heramba Chandra
College, he is passionate about reading fantasy novels, ever since
he was a child. With this book, he has taken his first step into the
world of fiction and intrigue, chalking out an unimaginable world
of secrets and mysteries.
GOODREADS / TWITTER

TWO copies of the book are up for grabs in this generous giveaway put together by Arka and Arup!

*The giveaway is INDIA Only.
*Enter by filling out the Rafflecopter form for the giveaway. If the form doesn't load, click HERE.
*After the winners are picked, they will have 48 hours to respond or else we'll be compelled to pick (an)other winner(s).
*The books will be shipped by the author and/or publishing house.

Good luck in the giveaway!
We'd like to thank Arka and Arup for having this awesome giveaway on our blog!

We have another exciting IN Only giveaway coming up soon, so do stop by for that as well.
Until then, happy reading and see you around!

Thank you all for stopping by!

Email ThisBlogThis!Share to TwitterShare to FacebookShare to Pinterest
Labels: Arka Chakrabarti, Fantasy, Giveaway, India only, Indian literature, The Secrets Of The Dark