Welcome to our stop on the Immortals Of Meluha Read-along. 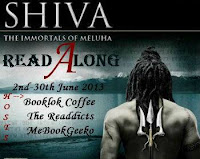 Today is officially supposed to be Janhvi's day to post but because she was on holiday for a week, she has loads to catch up on and unfortunately, you are stuck with me. J will wrap up the post for us!
As for the post today, I promise to keep you entertained and have fun and not bore you to death. Before we begin, you can catch up or recap the Immortals of Meluha: Week 1 Discussion that happened over at Ankita's blog, Booklok Coffee.

Now, onto the discussion!

Yes, I will honestly admit that I am finding it very difficult to "get" into Immortals Of Meluha by Amish Tripathi but I must also admit that the more I am reading, the more curious I am getting to know more and come to think of it, the book is interesting.
I don't have any grand opinions on the book, so I'll just put down a a list of characters that have me intrigued and plot lines that have me on edge.

The following discussion is based on chapters 8 to 15. 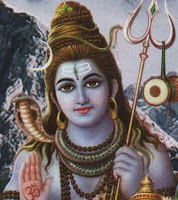 SHIVA: Shiva, our protagonist, is truly a hero and I love his humble and kind nature. He is very sweet. Even though everyone is in awe of the Neelkanth, Shiva still remains grounded. Author Amish had said that one of the best things he likes about Shiva is the immense respect he has for women and it shows in the book. Also, the little snippet we got of the little Shiva was very interesting, touching and difficult to put into my mind.

When reading about Shiva, I can't help but picture the Shiva that we've been shown as kids, which is the Shiva in the picture on the right. But for the movie adaptation of Immortals Of Meluha, they have picked Hrithik Roshan to play Shiva's role and I think Hrithik will do a fab job.

SATI: I like Sati's character as shown by Amish. I was very eager to know what Sati had done to be deemed a Vikarma and I liked getting to know more about that. I like how Sati is fierce, strong and for her time and age, very brave and independent.

BRAHASPATI: The whole conversation between Brahaspati and Shiva about the Somras and it's effects was good to read. I liked how Brahaspati was rational in his beliefs but still believed in miracles. The balance made it real. As he rightly says, "Sometimes one needs a little bit of faith when faced with a difficult situation. Rational answers don't always work. We also need a miracle. You can have scientific miracles too."

PARVATESHWAR: Parvateshwar is practical and smart. He is very protective of Sati, considers her as a daughter and looks after her. He seemed very arrogant and mean to me in the first few chapters but now I really admire his personality.

PANDITJI: The Pandit of Mohan Ja Daro was a sage and his thoughts were worth a good consideration. His views on society and about flexibility and stability being the essentials of a successful society were what got me and I couldn't agree more. But yes, his views on Vikarma bothered me and even then, I liked his determination to strive for the good of the society.

KING OF THE NAGAS: It's too early to have a concrete opinion on him. But when he ordered to save the drowning lady, I knew there was more to it. Maybe, just maybe that is why the second book is called The Secret Of The Nags. Only time will tell us, but I know for a fact that the Nagas will be good guys.

QUESTIONS: What characters intrigued you or irritated you the most?
Is there any particular character you are fond of or would like to get to know better? 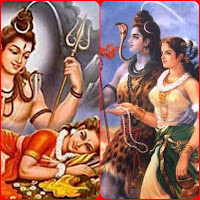 SHIVA AND SATI ROMANCE: The chemistry between Sati and Shiva is very visible. It's obvious the two have feelings for each other. I just hope that Sati's dad's intentions of getting the two together don't spoil anything. I love reading about the dance sessions between the two. Even though Sati has to be very careful as a Vikarma, like Krittika says, I really wish she loosens up a bit. 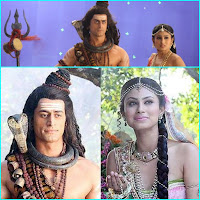 The picture on the left is a collage I made from a few pictures I came across online. They are from a mythological drama series called Devon Ke Dev Mahadev. Sati and Shiva look good, huh?

SUDDHIKARNA: Yeah, this practice, just like with Shiva, is not sitting down well with me either. I want it banned. But I know it's not going to happen.

AGNIPARIKSHA: Oh, I loved it when Sati takes on Tarak. Like I said, she is fierce. The Agnipariksha was action packed and go Sati! I loved that intimate moment Sati and Shiva shared at the end of it.

ACTION: There was lot of action in this part of the book and there's going to be more for sure. For a change, I'm quite enjoying the action.

GEOGRAPHY, HISTORY AND POLITICAL SCIENCE TEXTBOOK REFERENCES: Did you guys feel like you were sitting in your History class while reading about Mohan Ja Daro? I loved the little info we got about South India and the how the seven rivers came to make India the Land of the Seven rivers. Also, the references to Mesopotamia and Egypt took me back to my study of Athenian/ Greek/ Spartan political philosophy.

THE SECRET OF THE NAGAS: I have said it before and I am saying it again, there is something about the Nagas and I really want to know what it is!

QUESTIONS: What parts of the plot did you like most and what parts did you not like?
Are you as eager to know more about the Nagas as I am?

And the main question I have for you...
Are you liking the writing?

Personally, I feel that Amish has tried to keep his writing as simple as possible in order to connect with all sorts of readers (in terms of age). There were many times when the writing made me think if this is really the 19th century. I would have loved to see a more so to say "literary" writing. It would have added authenticity and grandeur.

Okay guys, that's all I have for you. No, wait!
I have a last picture which is something that will interest Ankita! She spoke about the Natraj post in her discussion and I came across a pic where our Shiva himself is in the pose. This one's for you, Ankita! 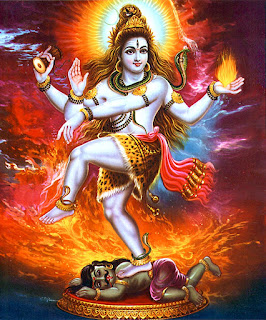 Okay, now that's really all I got! I hope I didn't take up too much of your time or bore you'll to death with my post. Do let me all your thoughts in the comments below.

Don't forget to stop by Kartik's blog, MeBookGeeko next Sunday for Week 3 Discussion and then back back here again for the final post. 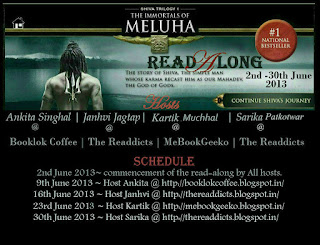 Hope you are enjoying the book and the Read-along!