Release Day: Excerpt + Giveaway- Addicted To You by Coline Brennan

Today is the release day of Coline Brennan's Young Adult/ New Adult Contemporary Romance, Addicted To You and we're glad to participate in the release day madness for the Addicted To NA Campaign!
We have an excerpt and a giveaway for you in the post below.

Colina Brennan
ADDICTED TO YOU
Addicted to NA 2013 Campaign 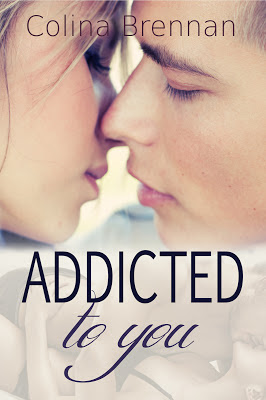 When twenty-one-year-old Leah Carter's latest one night stand burglarizes her apartment, her roommate forces her to attend therapy for sex addicts. Leah insists she isn't a sex addict; she just doesn't do relationships. After all, sooner or later, everyone lets you down.

At first, the group sessions are little more than an education on how to be promiscuous. Until she meets the newest addict—blue eyes, killer body, and a smile that tempts relapse.


Psychology student Will McLean is posing as a fellow addict while researching a case study on unusual addictions. But the more he learns about Leah, the more certain he is that his desire to break through her walls and unearth her secrets has nothing to do with his assignment.

As the uncertainties spike alongside the sexual tension, the only thing Leah knows for sure is that falling in love would be disastrous. Too bad love might be one addiction she can't kick.

Leah hated Thursdays. Specifically, she hated what she was forced to do on Thursdays—a program called ‘Heal the Heart, Save the Body,’ which was a convoluted way of saying ‘therapy for sex addicts.’
Despite her roommate’s insistence, Leah did not have a ‘sex problem.’ So she liked the occasional one night stand. So what? She was twenty-one and single. There was nothing wrong with wanting to make the most of it.
Yet here she was, preparing for another session where she’d have to listen to some old guy attempt to teach a room full of so-called sexual deviants the skills to function in a civilized world.
Because left to their own devices, they wouldn’t be able to resist the primal urge to hump everything that moved. Obviously.
Who decided sex was an addiction anyway? Or that someone should need therapy to “fix” it? Sex was good for you. It was a de-stresser. If it wasn’t, then you were doing it wrong.
She made a face at the platter of cookies set on an uneven seat a few feet away. She had tried one of them a few meetings ago, and it had nearly broken her tooth. They were sturdy enough to survive a nuclear apocalypse. They were cockroach cookies.
Maybe that was the key to these therapy sessions—to knock everyone out with stale confections so they were incapable of having sex.

Colina Brennan grew up in a small city, which gave her plenty of time to read and stretch her imagination. By day, she's attached to her kids, and by night, to her laptop. She writes about the fantastical and the romantic, and everything in between. Addicted to You is her first novel.

Email ThisBlogThis!Share to TwitterShare to FacebookShare to Pinterest
Labels: Addicted To You, Colina Brennan, Release Day