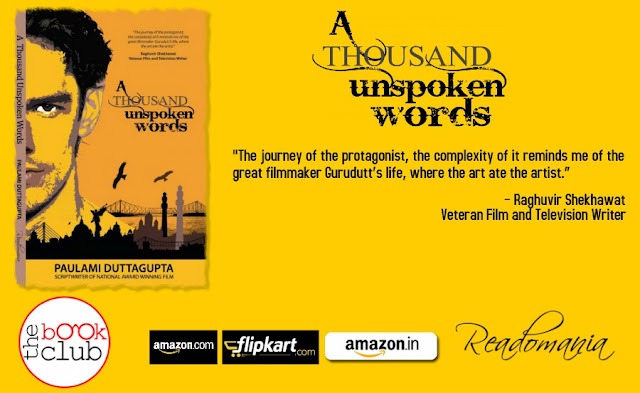 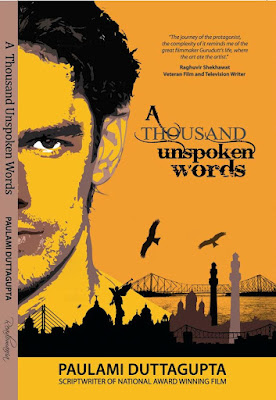 A hero, a person who displays great courage for the greater good, can also fall. But what happens to a fallen hero? A Thousand Unspoken Words is the unique journey of a hero who falls.

The champion of the underdogs, the writer who uses the nom de plume Musafir is famous in Kolkata. His incisive criticism of the injustices around him earn him many enemies but he holds his ideals above all else. Scathing attacks at his books and a night of hide and seek from political goons leads Musafir unto a path he never liked, faraway from his ideals. He runs away and chooses the comforts of money over the travails of following one’s ideals. The hero falls.
But Tilottama, passionate fan’s hopes don’t. When he comes back after many years, emotions, love and lust take charge and an affair brews. Will she bring back her hero? Will he rise again? Or will the thousand untold words, the many stories of the ideal writer be lost forever?

‘O Sachin karta this song reminds me of him.’

Tilotamma quickly wiped her eyes and turned the radio off. The day had been taxing enough. She needed to unwind, get Musafir out of her mind. How crazy could some people get? He had just written a fictional piece. How could fiction humiliate a government in power with an absolute majority? Wasn’t this a democracy? How could the supporters of a faith or political party get all insecure and burn his books?

The object of Tilottama’s despair, Musafir, was a writer supposedly based out of Kolkata. He wrote books at irregular intervals, and hid behind the veil of anonymity. His pieces were mostly social commentaries and satires on the state of Bengal. They were all fictional but had come under severe criticism in the past few months. Little paperbacks in funny covers, his books were available in old, rambling, bookstores across the city. Some were also available with the book vendors on the footpaths of the city.

When the news of the pulping of Musafir’s books had reached her a couple of days ago, Tilottama hadn’t thought things would go beyond a protest or two. The people of the city wouldn’t let go of things without a sign of protest. They got agitated at trivial things like who was included in a cricket team, and burned effigies and tyres in protest. They took out processions for Vietnam and Gaza. They could protest against him; but there would also be scores who would come out for her Musafir. They did when Firaz was hounded for his paintings of Goddesses.

‘And when they come out in large numbers, these goons will realize what it feels like standing before a civil society. They just can’t stifle Musafir’, she had confidently told her friends. What she did not realize was Musafir wasn’t exactly popular with the masses. His works were mostly literary and catered to niche readers. Her admiration for him had made her assume he was more popular than he really was.
Things had happened much faster than expected and spiralled out of control. Musafir’s printing press was vandalized and set on fire. Even as she and other Musafir fans watched, his books were dumped into that raging fire; words and hopes lost. The hundred odd fans tried to put up a bravefight, sang songs of freedom and stood with placards. But nothing worked. A couple of local channels had tried to stand by them in solidarity. The protest ended as a camera was smashed by the hoodlums on the road. People started fleeing fearing more violence.

‘They would kill us if they could’, Tilottama angrily spat out. ‘We were just so outnumbered. These were organized cadres. Yes, they were. Their bosses just can’t pretend to be innocent.’

A handful of policemen stood by pretending as if nothing was happening. The printing press was in one of the dingier parts of North Kolkata. It mainly did odd jobs like printing leaflets and bills, a few little magazines etc. and would print Musafir’s books on the sly. That is where he gave shape to his voice. The place was reportedly registered in the name of a man long dead, and people were left guessing who Musafir was. Some said the owner was a refugee who was avenging years of discontent. Some said his son was murdered by members of the ruling party. Some said he was just a frustrated man using the medium to lend himself a voice. To some other the entire idea was amusing and fascinating.

Tilottama grimaced and wiped her face clean. She was cutting a very sorry picture indeed, covered in grime andtears. All she could think of was her Musafir. She fought back her tears wondering what could have happened to her hero. For the past couple of years a strong wind of incumbency was blowing and Musafir’s voice had become stronger. Everything came under Musafir’s attack; from Dhaniajhapi to the burning of monks, the ban on English in government run schools, the apathy in the use of computers and much more. However, recently he had become vocal against all forms of religious appeasement and challenged the special religious laws. He had also set the stage against land acquisition bills, mismanaged industrialization plans and pre-election harangues. Musafir wrote as many books as possible bringing the discrepancies to light. And that is what brought about his downfall.

Tilottama sat on her bed and hugged her knees to her chest and went over the events of the day. She bit back the memory of the man who had asked her to let go of her placard, but that face would just not fade.

‘What had he called himself,’ she wondered, ‘Ayushmaan . . .no Riddhimaan.’

He was a photographer! How dispassionate could he be?He had watched the carnage, merrily taken snaps and asked her to throw away her placard. If even the press did not come out in support of Musafir, then who would? Weren’t both of them fighting to make the pen immortal? Why was the media silent now; because Musafir didn’t have international backing, or corporate sponsors? She was upset that Poltu had shamelessly praised the man. Riddhimaan and the likes of him would give importance to writers only if they had a South Block or Writers’ Building backing.

‘I wish this government goes down. They will go down. I promise you Musafir they will,’ she told herself.
The loud banging of her window pane broke her reverie. The rains had lashed Kolkata with all their fury that evening.

‘Even Mother Nature is angry. Drown the city, drown all of us. Since we have nowhere to go and hide our shame,’ Tilottama said aloud.

She continued to rant as she shut the window. She had hurt her finger in the process. Then she walked into her bedroom looking for the first aid box. As she cleaned the cut, the antiseptic made her skin burn and her thoughts drifted to Musafir. There was no way to divert her mind. Maybe reading Musafir would help, or maybe writing. Musafir always said he wrote to look for answers. Maybe she could do that too. But nothing gave her peace; maybe she was obsessed with the writer. The gag on Musafir was beginning to become a personal loss to her.

Paulami DuttaGupta is a novelist and screen writer. She shuttles between Kolkata and Shillong. She has worked as a radio artist, copy writer, journalist and a television analyst at various stages of her life, having been associated with AIR Shillong, The Times of India—Guwahati Shillong Plus, ETV Bangla, The Shillong Times, Akash Bangla and Sony Aath.As an author, her short stories have appeared in various anthologies and literary magazines. A Thousand Unspoken Words is her fourth book. Paulami also writes on politics, social issues and cinema. Her articles have appeared in Swarajya, The Forthright and NElive.
Paulami is associated with cinema and her first film, Ri-Homeland of Uncertainty received the National Award for the Best Khasi Film. Her second film Onaatah—Of the Earth is at post production stage and will release in 2016. She is currently working on her third screenplay. A short film tentatively titled ‘Patjhar’ is also in the pipeline.
Paulami is a complete foodie and is almost obsessed with watching one film every day. She also loves reading—political and social commentaries are her favourite genre. Literature classics and books on cricket are also a part of her library, apart from a huge collection of romances. Jane Austen’s fictional character Mr. Darcy is her lifelong companion. She is an ardent fan of Rahul Dravid and has been following all news about him for almost twenty years now.

This spotlight is hosted by