Prim, proper, and thrifty, Eve Dinwoody is all business when it comes to protecting her brother's investment. But when she agrees to control the purse strings of London's premier pleasure garden, Harte's Folly, she finds herself butting heads with an infuriating scoundrel who can't be controlled.

Bawdy and bold, Asa Makepeace doesn't have time for a penny-pinching prude like Eve. As the garden's larger-than-life owner, he's already dealing with self-centered sopranos and temperamental tenors. He's not about to let an aristocratic woman boss him around . . . no matter how enticing she is.

BUT LOVE CONQUERS ALL

In spite of her lack of theatrical experience—and her fiery clashes with Asa—Eve is determined to turn Harte's Folly into a smashing success. But the harder she tries to manage the stubborn rake, the harder it is to ignore his seductive charm and raw magnetism. There's no denying the smoldering fire between them—and trying to put it out would be the greatest folly of all.

What do you see when you look at me?”
What did she see when she looked at him?
Eve inhaled, trying and failing to tear her gaze from his.
Mr. Harte sprawled across her dainty settee like aViking marauder in a pillaged Christian church. Hisbroad shoulders took up more than half the width, hisarms lazily draped over the back. His scarlet coat wasspread open, contrasting with the sedate gray-
blueofthe cushions almost shockingly. One long leg was thruststraight before him, the other cocked open and restingon a booted heel. The pose made the apex of his thighsvery . . . obvious . . . and even as she kept her eyes locked onhis she could feel heat rising in her cheeks.
What did she see?
She saw violence and anger, kept under a control that was tenuous at best. She saw power and a strength thatcould hurt her—killher—ifhe so chose. She saw theinnate brutality that was, in larger or smaller part, inall men.
She saw her most terrible fears.
But—andthis was the truly unprecedented part—shesaw more in him. She saw temptation—hertemptation—alluringand frightening at the same time, his virility sostrong it was nearly a visible miasma in the space betweenthem.
She wanted him. Wanted that brash gaze, those long,muscled thighs, that mocking, insulting mouth, and theshoulders that went on forever, big and brawny and so
very, very male.
This was madness—sheknew that intellectually. She’dnever wanted a man before—wasin fact afraid of almostall men, let alone one so obviously, blatantly sexual.
She took a breath, hoping that he couldn’t read all thisfrom her gaze—andknowing it was a lost cause already.
His heavy-liddedgreen eyes were far, far too perceptive.
“I see . . .” She paused to lick suddenly dry lips. “Isee that your hairline is nearly a perfect arc across theexpanse of your forehead. That your eyebrows tilt ever soslightly up at the ends and that the right has a scar throughit. I see that when you are solemn, the outer edges of yourlips reach just to the midpoint of your eyes, but when yousmile, they go beyond the corners. I see that your chinand jaw are almost in classical proportion and that a smallwhite scar forms a comma on your chin just to the right of center.” She finally glanced away from him, breathingheavily, certain that she’d not thrown him off the trackwith her artist’s eye’s impressions. She inhaled again andended, “I see every line of your face, every line’s intersectionand how they relate. That is what I see when I lookat you.”
“And is that all you see? Lines?” His voice was deepand amused.
She chanced a peek.
He still watched her, his gaze utterly unperturbed byher observations about his countenance.
No, she’d not fooled him at all.
She licked her lips again, buying time. “I see,” she saidcarefully, cautiously, “a very self-possessedman.”
“Self-possessed,”he drawled. “I’m not sure whatthat means, frankly. It sounds, just a bit, like a coward’sanswer.”
Her gaze flew to his, outraged.
But before she could take him down a peg, he chuckledsoftly. “Tell me, Miss Dinwoody, would you like to knowwhat I see when I look at you?”
She shouldn’t. She really, really shouldn’t.
“Yes,” she blurted, and then winced because she knew well enough what men
thought when they looked at her: ordinary, if they were charitable.Plain if they were not.
She braced herself for mockery, but when she glancedagain at him, his gaze was hot and hard. Certainly notgentle. Certainly not kind. But he wasn’t dismissing her,either.
He looked at her as if they were equals. As if he reallysaw her, a woman to his man.
“I see,” he said, his deep voice musing, “a womanafraid, but fighting her fears. A woman who carriesherself like a queen. A woman who could rule us all, Isuspect.”
She gazed at him, her breath caught in her throat,afraid to exhale and break the spell.
A corner of that wicked mouth tilted up. “And I see awoman who has a deep curiosity. Who wants to feel but is worried—ofherself? Of others?” He shook his head. “I’mnot sure.” He leaned forward slowly, destroying his pose,and she had to fight herself not to scoot her chair away fromhim. “But I think she has a fire banked within her. Maybeit’s only embers now, glowing in the dark, but if tinder wereto be put to those embers . . .” He grinned slowly. Dangerously.“Oh, what a conflagration that would be.” 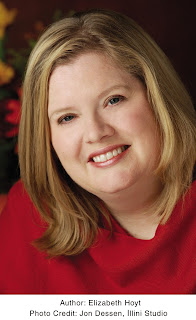 Elizabeth Hoyt is the New York Times bestselling author of over seventeen lush historical romances including the Maiden Lane series. Publishers Weekly has called her writing "mesmerizing." She also pens deliciously fun contemporary romances under the name Julia Harper. Elizabeth lives in Minneapolis, Minnesota, with three untrained dogs, a garden in constant need of weeding, and the long-suffering Mr. Hoyt.

The winters in Minnesota have been known to be long and cold and Elizabeth is always thrilled to receive reader mail. You can write to her at: P.O. Box 19495, Minneapolis, MN 55419 or email her at: Elizabeth@ElizabethHoyt.com.