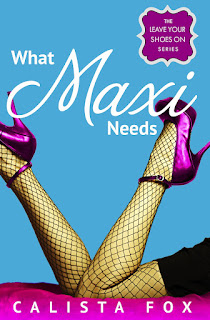 Maxi Shayne needs to be on her toes as the new vice president of operations for Staci Kay Shoes. With a production crisis looming, she can't afford distractions - but every tall, chiseled, dangerously handsome inch of Ryan Donovan is exactly that. What's worse, the gorgeous Aussie is a numbers nerd hired to get the company back on track and Maxi is his new boss. Which means no matter how wildly tempted she is, he's strictly off-limits. Ryan hadn't factored blue eyes, long legs, and a sexy smile into his equations for success, but after meeting Maxi, he's definitely ready to recalculate. Keeping his mind on business isn't easy though, because whenever she's near, all he can think about is what else she's got going on above her six-inch black stilettos. Before he can get the job done, Ryan will have to convince Maxi that the office doesn't have to be all work and no play.

Ryan pushed at the bridge of his glasses to hitch them up his nose a notch. Not dismissing the fact that he was muddying waters by bringing intimacy into their exchange, yet unable to stop himself. Maxi easily ignited his inquisitive nature. Stimulated it beyond all belief, to be exact.

“Huh,” she mused with a playful smile. “’Cause you’re making me think in scientific terms here, Doc.”

“Hilarious,” he deadpanned at the moniker she’d used. “Point being, at the intervals I’m utilizing for this hypothesis, you might end up spending approximately twenty-six hours a week with someone you’re romantically interested in—not married to, living with, or seriously dating, mind you—versus the fifty hours you spend with someone you’re not romantically involved with. Which would conclusively indicate that you are more attuned in a more in-depth capacity at concentrated levels to the person you work with versus the person you have dinner and occasional sexual relations with—correct?”

Her eyes squeezed shut for a moment. Then flew open. Her mouth worked vigorously like a fish attempting to dislodge a hook stuck in its throat—or maybe she thought she had a rebuttal, but couldn’t quite form the full concept in her head.

Ryan waited patiently as she grappled with her internal ruminations.

“I’m sorry,” she finally repeated, pinning him with an intent look. “I’ve completely forgotten what we were originally discussing.”

“The theory of platonic friendship.” His gaze swept her office, landing on the framed whiteboard mounted to a portion of one wall. He stood. “Let me diagram it out for you—”

“No!” she blurted.
His body jolted at her forcefulness. Jolted in a good way. “No?”

“No.” She set her sandwich aside and got to her feet, gazing deep into his eyes. “No diagramming, extrapolating, analyzing. No low-hanging fruit here, Doc.”

She rounded the desk. Planted her hands on her hips. “Carnal compatibility isn’t about studies and measurements and quantum-fucking-physics. When two people are hot for each other, Ryan, they’re just that—hot for each other!”

Gripping his lapels in her slender fists, she insisted, “It’s sexualchemistry, Einstein. Raw, insane, vibrant, explosive! In its very purest, utterly basic, most fantastic form, it makes you completely irrational and urges you to tear off clothing and give into every raging desire clawing at you. Clawing at you!”

Maxi wasn’t done. “And there is no Gantt chart in the world that can predict it, graph it, keep it on track, or promise that it won’t wreck you to the core of your being. But when it happens? Holy hell! Just let the firestorm burn you through and through!”

She tugged him roughly to her and kissed him deeply, madly, passionately.

Ryan let her. Responded vehemently, in fact, all physical restraint fleeing. In a heartbeat.

Calista is a former PR professional, now writing fast-paced, steamy books to set your pulse racing! She is an Amazon bestseller and has won many Reviewer's and Reader's Choice Awards, as well as Best Book Awards and other competitions with publication as first prize. Calista is a college graduate and teaches online writing classes. She is also Past President/Advisor of the Phoenix Chapter of Romance Writers of America.

Thanks guys and happy reading! :)