A bombshell bookworm. A chronic Casanova. And a lesson in chemistry too scandalous for school.


When Hanna Bergstrom receives a lecture from her overprotective brother about neglecting her social life and burying herself in grad school, she’s determined to tackle his implied assignment: get out, make friends, start dating. And who better to turn her into the sultry siren every man wants than her brother’s gorgeous best friend, Will Sumner, venture capitalist and unapologetic playboy?
Will takes risks for a living, but he’s skeptical about this challenge of Hanna’s…until the wild night his innocently seductive pupil tempts him into bed- and teaches him a thing or two about being with a woman he can’t forget. Now that Hanna’s discovered the power of her own sex appeal, it’s up to Will to prove he’s the only man she’ll ever need. 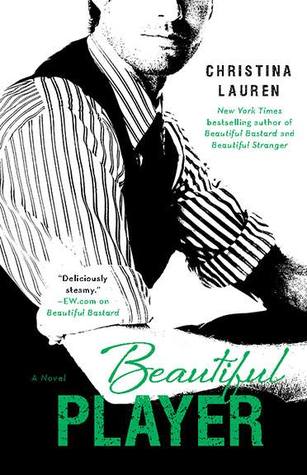 Beautiful Player is the third full length novel in Christina Lauren's Beautiful Bastard series. This series has been steadily improving since the first book and as we go ahead I am totally getting invested in all the characters and their lives. I have to admit, Beautiful Player was the best book in the entire series till date. It had everything you could ask for in a hot romance.

Hanna is a scientist. Her social life has been zero lately so her brother asks her to get Will's help to improve it. Hanna was a different heroine. She wasn't afraid to ask for what she wanted and she was very straightforward which ended up being pretty funny. If there is anything I didn't like about Hanna was that she judged Will really quickly and didn't see how different he was with her.

Then we have Will. Despite being a player Will was one of the nicest heroes I've read about. Hanna is like a breath of fresh air for Will and after being a ladies man for so long he is ready for a real relationship. Again, Will was overall awesome but the thing that irritated me about him is that he wasn't as open with Hanna about what he wanted despite saying over and over again how he has been clear with his past girlfriends, if you could even call them that.

Will and Hanna shared really great chemistry. I enjoyed all the conversations they had. They were really nerdy and fun and adorable. The misunderstanding they had was really silly I felt and after they had shared so much with each other it could have been resolved more easily but wasn't. Plus the whole friends with benefits thing was kinda reused.

I really loved getting to see Hanna's family and the bond Will shared with them. Simultaneously, I also loved getting to see Bennett and Chloe and Max and Sara and how they were always there for Will, pulling his leg. This book was filled with hilarious situations which made me fly through the pages. Beautiful Player was a great addition to the series.