Review- The Boy in Striped Pyjamas by John Boyne

The Boy in Striped Pyjamas on Goodreads

Berlin 1942
When Bruno returns home from school one day, he discovers that his belongings are being packed in crates. His father has received a promotion and the family must move from their home to a new house far far away, where there is no one to play with and nothing to do. A tall fence running alongside stretches as far as the eye can see and cuts him off from the strange people he can see in the distance.
But Bruno longs to be an explorer and decides that there must be more to this desolate new place than meets the eye. While exploring his new environment, he meets another boy whose life and circumstances are very different to his own, and their meeting results in a friendship that has devastating consequences. 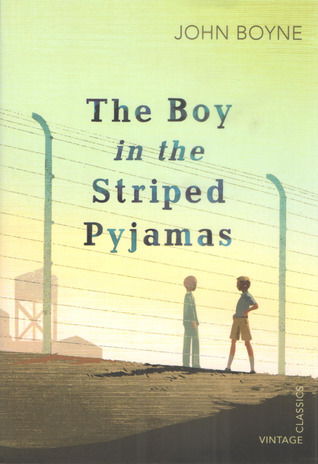 When my friend Ao, over at Aobibliosphere, recommended The Boy in Striped Pyjamas to me and when I read his review for the same, I knew that I had to read the book. Even though I could try to understand why the book has got many negative reviews and why it has been bashed, I really don't care, because to each her/ his own. Besides, for me, The Boy in Striped Pyjamas was somewhat like The Kite Runner meets Between Shades of Gray, and it was a very moving and touching story that had my heart shedding tears.


Fictionalizing history is very difficult because there's always going to be something that is going to offend someone. Bridging the gap between reality and fiction by respecting both is a truly an art, and author John Boyne narrates a resplendent tale of two boys who look at each other as humans first, and don't even bother defining each other based on anything else. While their innocence could be termed as naïveté, why wouldn't nine year-olds behave like nine year-olds? There was so much of depth to Bruno and Shmuel's friendship that it made me want to get them out of the book and hug them tight.

More than just friendship though, The Boy in Striped Pyjamas is about a very difficult and violent period in history. What's told in this glorious tale is the story of two boys and two boys alone, but there's so much more to it than just that. The story is about courage, humanity and hope. Courage to cross the line and greet another as a friend. Humanity towards another human, which is what's expected. And finally hope that one day, everything will be all right.

The Boy in Striped Pyjamas left me in tears and the two young and awe-inspiring boys taught me so much about life in less than 200 pages. John Boyne tells a lovely and heart-breaking story in a very simple manner. The author's writing was incredible, his words flowed so easily and his characterization was very realistic, with flaws and imperfections- just the way it should be. The Boy in Striped Pyjamas will take a few hours to finish, but will stay with the reader for far more than that time.