Monkeys, Motorcycles and Misadventures on Goodreads

After having recurring dreams, a man considers retracing Lord Hanuman's epic journey from India to Sri Lanka. While rationality argues against the pursuit, the dream appeals to something deeper, and he sets out with two friends on a 1200 kilometre trek across South India. The journey however, doesn’t turn out to be quite what they expected. Along the way, through encounters with evil cans of pepper spray, wise men, pimps, hellhounds, and manic elephants, they are forced to confront their personal demons. At one of their lowest moments, plagued by doubt, they lose all hope. That's when they experience a sign, the first of many, which renews their spirits and helps them push forward.
Monkeys, Motorcycles, and Misadventures, provides a candid account of the trio’s incredible journey - their misgivings, sufferings, and triumphs, all in search of faith. 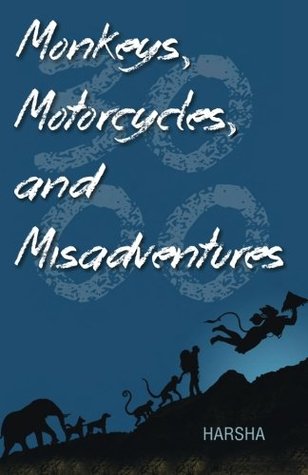 
Even though Monkeys, Motorcycles and Misadventures doesn't fall under a genre I normally prefer to read, when I first came across the book, there was something extremely intriguing about it, which is why I decided to step out of my comfort zone and give it a try. I was definitely pleasantly surprised by how much I enjoyed the book, and more importantly, how much I learned from it. This was a book wherein the balance between fun and seriousness was well done and it made for a very entertaining yet enlightening read.


Monkeys, Motorcycles and Misadventures is the story of an epic trip taken by three best friends Sam, Sri and the author Harsha, after the latter has a dream in which he follows the entire path taken by Lord Hanuman on foot. I've always believed that dreaming is easy, but actually making a dream a reality is what is difficult, and people who pursue their dreams are full of bravery and courage. In spite of how ridiculous it might seem to someone on the outside, the trio go on a journey that changes them; for better or worse, that's for the reader to decide.


Throughout the book or rather the journey, emphasis is laid on faith and whether what the trio are doing actually makes sense or no. Sam, Sri and Harsha were so different from each other and that gave three different perspectives on a single thing which was very beautiful in a broadening your horizons or taking back something from it kind of way. The incessant and hilarious banter between Sam and Sri, for me, was the highlight of the book and even though the book is Harsha's story, I found myself relating the most to Sam, who seemed like my twin.


It is clear that a lot of thought and research went into writing  this beautiful book because it taught me so much about our rich Indian mythology, our vast and wonderful country, people, nature and practically everything in between. I'm not the biggest fan of trekking or hiking, but this book has made me want to get out there, explore more, appreciate nature and just live and feel the moment. Besides, being an animal lover, I was touched by the many mentions they got, and major, major plus points for the concept of "dogeism" which had me smiling.


Monkeys, Motorcycles and Misadventures is about more than just an epic trip. There is so much more to it than just three friends having the time of their lives. The book is about faith, friendship, trust, courage, strength and humanity and I devoured every page of it; but most importantly, it is about not giving up. It is the kind of book with which you have to relax and take your own time to really understand how deep it is and to make yourself a part of the journey.

*Note: This book was provided by Harsha and Leadstart in exchange for an honest review. We thank them for the book.