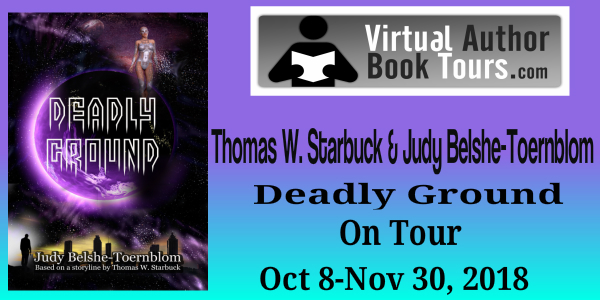 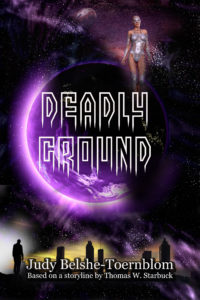 “Deadly Ground” – a riveting story about the human race under threat, with a rare DNA condition providing a second chance for humanity. A fast-paced novel that reads like an apocalypse movie with a biological viral disease, some romance, and aliens in the mix, centered on the unforgettable human main character AB, who becomes the hope for humanity’s regeneration. By author Thomas W. Starbuck, whose storyline for “Deadly Ground” was adapted and written by Judy Belshe-Toernblom.

As he left the room, he passed Clayton’s desk. He saw a picture of Clayton, Colleen, and their family, including their dog Winnie.
“Winnie . . . she’s alone. I’ve got to get to her.”
He quickly pulled the picture out of the frame and tucked the picture into his pocket and left. Outside, AB loaded scanning devices and the matching equipment into his H2. He took a long last look at the CDC headquarters and then got into his H2 and drove away.
Once again, AB was carefully negotiating the streets of Atlanta. It was a silent war zone. Homes were broken into, doors were open. There were cars up on lawns and driven into buildings. There were family animals running everywhere, terrified and trying to find their owners . . . but no humans.
AB pulled up in front of Clayton’s home and exited his H2. He cautiously walked around the home and on to the backyard. He did not see Winnie. He calmed his voice and called to her.
“Winnie, Winnie it’s AB. Where are you, girl?”
He whistled. Then he picked up a few of her toys and squeaked them. He stuck a few dog cookies from her bowl into his pocket. He continued his walk to the garage. There she was, cowering in the corner of the garage. Winnie could hear him but did not come to him. Instead, she just watched him. He entered the garage unhurriedly and steadily to not scare Winnie.
“There you are, girl—” AB stopped in midsentence.
“Oh, sweet lord, it’s the children . . .”
Winnie was lying next to what appeared to be children’s clothing. The arms of the little boy’s clothing were wrapped around the little girl’s clothing.
He gasped and began to pant for air. The sight was too much. Then he remembered his mission. Through his tear-filled eyes AB looked around for a container to put the children’s dust into. On the shelf was a mason jar. He collected the dust of the children. As he did, Winnie slowly walked over to him. She was traumatized. AB held out a biscuit, and Winnie took it. AB petted Winnie and comforted her.
“That’s a start, girl, good girl.”
AB took the container now filled with the children’s dust and left the garage, Winnie followed. He asked himself, Where was Colleen?
He walked to the back door of the house. He cautiously opened it and walked in with Winnie. The door opened into the kitchen. There on the floor was the clothing and the dust of Colleen. There was a broken plate of sandwiches and spilled drinks on the floor. The food was covered in flies.
“She must have been fixing the children a snack, girl.”
AB petted Winnie again in a consoling way. He continued his ritual of gathering Colleen’s dust. He poured her dust in with the children’s, and then walked back outside. He sat on the stoop of the porch and cried as the humid Atlanta sun beat relentlessly on his back.
He looked around the yard and down the driveway. It was so quiet. He hated the quiet. To make matters worse, it was a muggy, sticky scorcher of a day that only added to the stench now rising from every orifice in the town.
Gathering his strength, he and Winnie walked to the H2. He opened the door of the H2 and took the container with Clayton’s dust and poured his family’s dust into the container. AB wiped the sweat from his face and tears from his eyes.
“I know you’d all want to be together.” AB and Winnie got into the H2 and left. 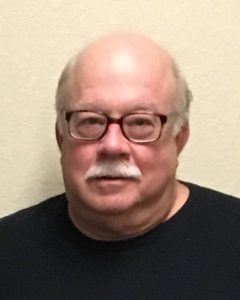 Thomas W. Starbuck, an eternal optimist, finds joy in everything around him – from quality time with his active family to quiet meditation and contemplation about the world around him. Never living life in the status quo, Tom had an idea for a story. This spark of an idea for a screenplay turned into Tom’s first novel, 'Deadly Ground', published in April 2018. To give Deadly Ground the soul it needed, Tom worked with gifted writer, Judy Belshe-Toernblom, on both the screenplay and novel, and they were recognized by the 2018 Capital Fund Screenplay Competition Top 100. Tom is the father of two daughters and a beloved granddaughter, who one of the Deadly Ground characters was named after. He lives with his wife of 45 years in Des Moines, Iowa, where he graduated from Drake University and worked in financial services for 32 years prior to retirement in 2009. 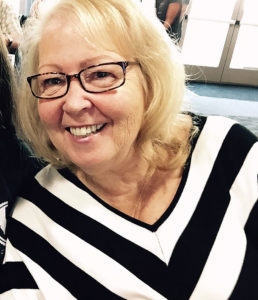 Multi-talented Judy Belshe-Toernblom has spent her career as an award-winning writer/producer/casting director in Hollywood. Having published 5 books, Judy received the Dove Foundation Award for her book, Boonville Redemption: The End of the Beginning, as well as its film, Boonville Redemption, starring Pat Boone, Edward Asner and Diane Ladd. Working with Thomas W. Starbuck on both the screenplay and published novel, Deadly Ground, they were recognized by the 2018 Capital Fund Screenplay Competition Top 100. She also received the Irwin Award for her book, It's A Freeway Out There! Everyone's Guide to the Film and Commercial Industry. She's had the privilege of working with award-winning directors over the years, casting for movies, educational films, industrials and infomercials,  such as:  McGruff the Crime Dog series, How the West Was Lost (Cable Ace Award), Knotts Berry Farm, Oroweat, Disney educational projects, Boys and Girls Town PSAs, Will Rogers Institute PSAs, and 100s more.

This giveaway is for the winner’s choice of one print or ebook copy of the book. Print is open to the U.S. only and ebook is available worldwide. This giveaway ends November 30, 2018, midnight pacific time. Entries are accepted via Rafflecopter only.