Review- After Midnight by Elle Kennedy

From a talented author on the rise comes a sexy new novella in Elle Kennedy’s action-packed Killer Instincts romantic suspense series.
Abby Sinclair was one of the deadliest assassins in the world before she became a mercenary. She likes her work—the missions, the adrenaline, the danger. But now she has a secret that could change everything. Especially since she and her husband, fellow operative Kane Woodland, have been thrust into an assignment that has put their lives in mortal danger. But as the secrets between Kane and Abby pile up, they begin to drift apart—until only a fatal twist in the mission can bring them back together…. 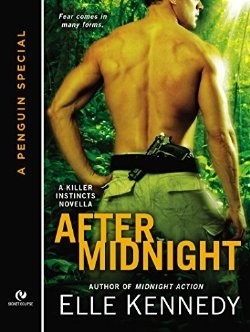 After Midnight by Elle Kennedy is the only novella till date in the Killer Instincts series. This novella lands smack in the middle of the series where we are taken back to Abby and Kane who were the first couple in the series. I don't know if the reason I didn't enjoy this as much as the other books in the series is because this was a novella or what but After Midnight was an okay read.

I have to admit that Abby and Kane were never my favorite couple out of all the ones I've read so I wasn't all that excited in the first place. But still, it was good to see them as a much in love married couple. Abby has always been the more closed off person in the relationship but when things change she pulls away even more which causes a rift between the two.

I don't know if this is exactly a spoiler but the reason for the misunderstanding between Abby and Kane is -you guessed it- pregnancy. Abby has her doubts about being a mother whereas Kane is over the moon. As both Kane and Abby are mercenaries this means huge changes for the both of them.

While nothing significant happens in this novella, we do get to meet Noelle in all her glory and we are hinted at a more human side of her personality. This novella was nothing too special so if you are not interested, you can skip it. I like to read every single book while reading a series and that is why I didn't skip After Midnight.