Please join Rose City Reader every Friday to share the first sentence (or so) of the book you are reading, along with your initial thoughts about the sentence, impressions of the book, or anything else the opener inspires. Please remember to include the title of the book and the author’s name.

What’s past is prologue. —WILLIAM SHAKESPEARE

She woke in the dark. Through the slats on the window shades, the first murky hint of dawn slipped, slanting shadowy bars over the bed. It was like waking in a cell.

-Naked in Death by J.D.Robb 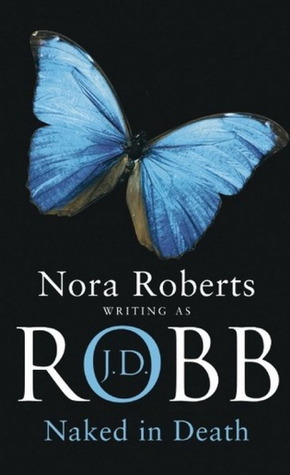 It is the year 2058, and technology now completely rules the world. But New York City Detective Eve Dallas knows that the irresistible impulses of the human heart are still ruled by just one thing: passion.

When a senator's daughter is killed, the secret life of prostitution she'd been leading is revealed. The high-profile case takes Lieutenant Eve Dallas into the rarefied circles of Washington politics and society. Further complicating matters is Eve's growing attraction to Roarke, who is one of the wealthiest and most influential men on the planet, devilishly handsome... and the leading suspect in the investigation.

Email ThisBlogThis!Share to TwitterShare to FacebookShare to Pinterest
Labels: Book Beginnings on Friday