‘Ohh! Gods Are Online..’ is an experimental book wherein the Gods move from the realm of the fantasy to the real world in the quest of solutions to the human dilemmas as they decide the fate of their creation – Mankind.
Christ lives on his own island where the dead souls are welcomed to the afterworld. The other God, Krishna, lives in the harsh real world as a humble pantry boy employed in a hospital – easing the final journey of the people who are dying. Buddy Roy, the Buddha, sends his calming waves to the world from afar. Ati, the God of Atheists, lives on his island with his own set of followers. While Gods go about their tasks they connect on Facebook to ‘chat up’ God things.
The Gods travel between the imagined worlds – Clacton-on-Sea, Jaywick, Frinton-on-Sea, the underwater World of Mermaids and the real world. Human stories of mortals are woven within the fabric of the main story of Gods. Sunderaman is the meanness in man that Gods must confront. Nick, the God of Evil, contrives to use Sunderaman as a pawn to oust the Gods. Somdev, the Godman, wants his share of the Gods’ world. Gods watch over as human characters live out their destinies.
A fast-paced novel, ‘Ohh! Gods Are Online..’, moves between the worlds of men, Gods, and evil forces. Men are transformed to animals and Gods live like men. The characters slide from one life to afterlife and the next life.
Humour, philosophy, fantasy, mythology, and a compelling story are crafted together to write the novel. The novel was neither discussed, nor planned. The chapters were added in a two-year-long to and fro of the script between the authors. The story took many turns and twists as the writers played a game of challenging each other with new characters and plots. The story was neither planned, nor contrived, it was allowed to flow. 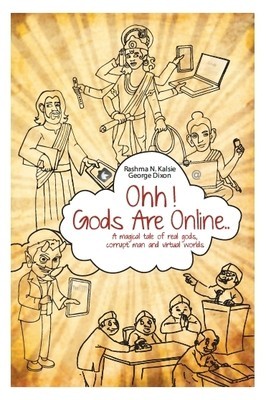 *NOTE: We (The Readdicts) received a copy of Ohh! Gods Are Online.. by Rashma N. Kalsie and George Dixon from Srishti Publishers & Distributors in exchange for an honest review. We thank the publishing house for the book!

Ohh! Gods Are Online.. had been sitting on my shelf since August 2013. I had no intentions of reading the book. I thought I'd just give it away to a reader who was actually interested in it. But then Janhvi and I got to clearing our piles by reading and reviewing all the pending review books. So I finally started reading Ohh! Gods Are Online.. and I honestly wish I'd just gone with my previous decision of not reading it.
Ohh! Gods Are Online.. is a story in which gods live among humans as normal people and still, in thier own mystical and pretty way, carry on the godly tasks they need to perform. Each god is on Facebook and they are all in constant touch with each other so much so that they even plan a huge party via these virtual relations. Each god is given a colloquial name as their virtual identity
When it comes to god, I am on complete so-so grounds though my personal opinion hardly even matters. I know that there are many people who easily take offence at anything anyone says about the god they worship and this book might not exactly be pleasing to them.

The book just didn't sit down well with me. Not because I have any problem with it, but I couldn't care less about it.
It's actually a very amusing story because it's something different but unfortunately, it lacks more things than it contains. The writing, for example, was really- I hate to say this- abominable. And that made the execution of the plot really mediocre. It seemed like I was reading something written by someone who has written just for the sake of writing. It seemed very rushed and not at all well edited and that's just plain sad.
I don't even have much to say about Ohh! Gods Are Online.. since there are tons of things about it I didn't understand and what I did understand, I didn't care about. It does have a good plot and a good lesson to learn by the end of it. If only it were well executed.
The only good thing that came out of reading this book is that I now know that I shouldn't read what I don't want to read. 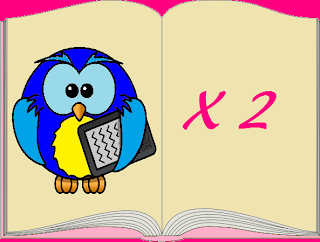