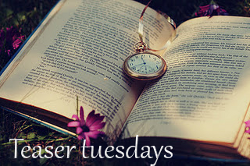 **Recommended for ages 17+ due to sexual content and language, mature subject matter**New Adult ContemporaryLost. That one single word best describes my life at this very moment. I lost the last games of the season and both my team and my coach blame me. I lost the last two months because I drowned in my own despair like a complete loser. And I lost the only girl who ever mattered because I was afraid being with me would destroy her.But now I realize how truly lost I am without her. She has become my story…and even though she acts like she’s moved on, I know she still thinks about me just as much as I think about her. She’s beautiful, sweet—and so damn vulnerable, all I want to do is help her. Be there for her.Love her…If only I could convince Fable to give me a second chance. Then I wouldn’t feel so lost anymore, and neither would she. We could be found together.Forever.

What's your teaser this Tuesday?