Hey guys! Today we have with us Ruchi Vasudeva, the author of Bollywood Fiance For A Day for a fun interview. Do check it out :) 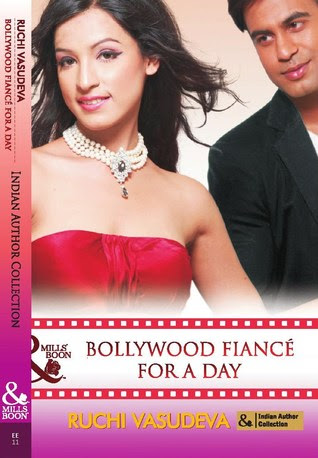 The man of her Bollywood dreams
Winning the chance to meet the ultimate Bollywood heart-throb, Zaheer Saxena, is just what Vishakha needs to take her mind off her recent humiliation—being jilted the week before her wedding! And when gorgeous Zaheer offers to be her fake fiancé, the chance to save face with her family is just too tempting…
It’s a deal that benefits them both—Zaheer is warding off any unwanted female attention until his next film is finished—but can Vishakha trust herself not to hope that her dream fiancé for a day will be her forever man?

I'm a medical professional who lives in Punjab with my husband, two kids and in-laws. Somehow I fell into writing and after much churning and rechurning out of words, my debut book was released this year. I also turned Professor of Physiology and thus August '13 has become a landmark for me in both my careers. It feels really exciting to have made this far.

2. Describe your book, Bollywood Fiance For A Day in 140 characters or less.

She’s been jilted. He’s a superstar out for fun. He drives her crazy with annoyance till she  discovers that he has vulnerabilities too...

3. How did you decide to write Bollywood Fiance For A Day? What inspired you?

It's hard to pinpoint exactly how it came into my mind. I was writing a story for the Passions contest held by Harlequin. I had this mental image of a girl who is facing an actor under the glare of cameras and is scared of them. Then the background of another story in which the heroine had been jilted merged into this and poof! I had the heroine true to life in my mind. I sent in the story and luckily I won the contest! Along with other prizes, came an opportunity to develop the story into a novel. Zaheer, the hero, zoomed into focus when I penned his first dialogue in response to Vishakha's accusation :'You're late!' Instead of being apologetic he's totally in control and laid back about it as he says 'By almost two hours.' I knew that moment on, he was going to get Vishakha's back up and irritate her no end. So he did...but he also realized he had met his match in this girl.

4. Have you always been a Mills and Boon fan?

Pretty much. Though I left reading when I got in job and then getting married and having kids kept me busy so there wasn't much time to read. I picked up reading again some years back and I was surprised at all the new lines and genres that hadn't there during my time. The covers and the writing is much more glamorous too since then.

5. How much of your characters are based on real life people?

Initially I may draw inspiration from real people. But as the characters come into their own with their specific goals and motivation, they become their own person. Then, like a satellite, they are detached from the initial trigger and are revolving in their own world. *smile*

6. What are the must have qualities in a hero for you?

Well, integrity for one. Then a sense of humour. He should stand for his beliefs and be protective of those he loves. Being good looking doesn't hurt either!

7. Who are your favorite romance authors?

8. What are your current favorite reads?

I recently read Nicholas Sparks' The Notebook and I found it very moving.In Harlequin, I enjoyed Staking claim by Tessa Radley. I've been rereading Sidney Sheldon's works. The onset of winters also makes me think of reading historicals for some reason and I'm looking forward to reading an Agatha Christie when I can lay my hands on one.

9. What can we look forward to next from you?

For the moment more romantic reads! My second book 'You Can't Fight A Royal Attraction' is coming out in December. A story has been accepted for publication in an anthology from Harper Collins India. I'm currently working with my editor on third book idea.

Bollywood or Hollywood?
Both, with a little bit more of Hollywood!

Paperback or ebook?
Again both, but more of paperback.

Day or Night?
Night. Though I usually have to miss out my most active time because I have to get up early for work.

Romance or Mystery?
Both again. Variety is the spice of reading!

Tea or coffee?
Tea most of the day but one cup coffee is mandatory!

Ruchi : Thanks, Readdicts. A totally funn round of questions. I enjoyed being here and now I'll leave you with a snippet from my book, Bollywood Fiancé For A Day.

‘Your sense of humour is about as good as your punctuality,’ she snapped.
‘But your looks are better than your temper,’ he drawled.
‘You need someone better to write your lines.’
‘Ah, and you need—’ he cocked a dark eyebrow ‘—a crane to lift the chip on your shoulder.’
She glared at him, stymied for an instant. The chip…yes, she did have a chip.
She’d thought she’d left it home.
A cluster formed around Zaheer and several voices clamoured for his attention, microphones waving in the air. The media closed in on the actor for comments. Left alone, her thoughts turned towards her own troubles again.
The misery she’d been battling for the last week tightened on her heart. Damn it, she didn’t want to think of it. Her mind kept wallowing in the might-have-beens. She’d thought the buzz of this visit to Mumbai, the glitter of being at this glamorous event would lighten her angst. But it closed in on her with the irresistible force of monsoon clouds blocking out the bright Indian summer sun. 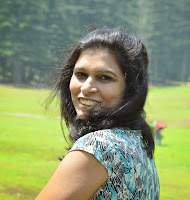 A procrastinator piously working at reformation, author with a zany routine, slightly harried mother of two with a smug hubby, who always manages to get the better of me (must work on my come-backs more!) I love to write intense in emotion, tender stories. When not bent double over the laptop, I might be found with my nose in books or munching nachos at the movies or glued to the telecast of Team India in action.

Thank you so much Ruchi! Wish you all the best with your book!
Happy Friday everybody :)