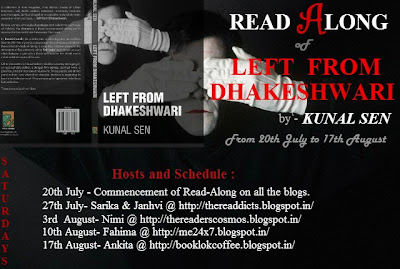 Hey guys! Ours is the first stop in the Left From Dhakeshwari Read Along. You can find out all the details of the kick off post and our fellow hosts by going to the link below.

First, a little about the book. Left From Dhakeshwari is actually a collection of nine short stories which are all inter connected with each other. These nine short stories are described as nine tragedies and from what I can tell, each story focuses on a particular theme like urban loneliness, lust, death, sadism, obsession, memories, madness etc. Yeah, tough stuff but that is what makes it so intriguing. 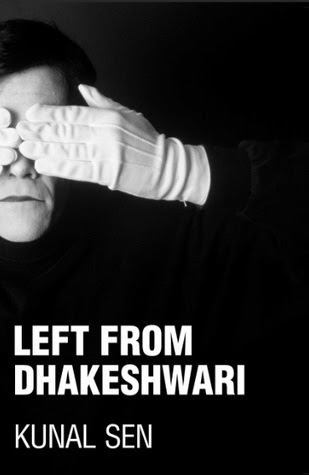 'Left from Dhakeshwari' is a collection of nine interconnected stories dealing with lust and loneliness, death and obsession, memories and madness.
In the first story, 'We Were Writers', we meet a Bengali film actress, who after her brother’s suicide, returns to her small hometown and reflects upon the life she left behind; in ‘Bomb Church’, Aniruddha tries to piece together his mother’s identity after her mysterious departure; the only clues available in the existential whodunit being: a soap-box, a brown shoe and the statements of five witnesses; while the heartrending 'Salt Lake' recounts an unusual affair between a disfigured girl and a mime-artist with scars of his own. The other characters in this collection include a runaway teenage-girl, an agoraphobic writer, a masochistic cosmetic surgeon, a ghostess, identical twins and a manic-depressive housewife. And they are all in search, of a time and place they can call their own. That is perhaps why the title itself, denotes both a time and a place: a point of departure and the forbearer of journeys. In his first solo book, Kunal Sen infuses his women with souls of poetesses and a seductive melancholy and arms his men with child-like, romantic sadism. 'Left from Dhakeshwari' is written in a style that straddles between the tragic-dramatic and mildly surrealistic, but remains in the end a book about some remarkably original people and their depths and failings.

This is the first week in the read along so, Sarika and I will be talking a little about the first two short stories in the book.

We Were Writers
This short story seems to be dealing with death of a loved one. A quote by Charles de Lint from Into the Green sums it up perfectly- "Death is a tragedy...but only for the living. We who have died go on to other things." Gublu and Riju in this story are dealing with the death of Babla who was Gublu's brother and Riju's best friend. This story seems to have a mix of emotions. There are a ton of unsaid things between Gublu and Riju. There is anger but also acceptance.

Bomb Church
This story seems to deal with obsession from what I can make out. Aniruddha is determined to find out every single detail from every person imaginable connected to his mother. His mother has been missing since his child hood and all he has are a few glimpses of memories with her. Aniruddha's need to find out more about his mother has taken him to great lengths and I think his obsession will lead to his destruction. There is no contentment in his character even by the end of the story.

In General
The stories were okay, but a little hard for me to get into. It took me time and a few minutes to figure out the Tree of Characters before I actually got what I was reading. Though the themes behind each story came through clearly. The writing was really good. I'm quite intrigued to see how all the stories will intertwine. if they do. Or if they just are.

The cover for Left From Dhakeshwari is really different and unique. It depicts a mime artist and I am most looking forward to the story "Salt Lake" which shows an unusual affair between the mime-artist and a girl with a three inch scar on her cheek. I'm all in for a forbidden romance but yeah seeing that these stories are tragedies I have no hope for a happy ending.

Questions
What did you think of the themes in the book?
How did you find Kunal Sen's writing style?
Do you like the cover?
Do you prefer short stories or full length novels?

Let us know in the comments below :)
And don't forget to stop by the other hosts' posts in the weeks to come.
Happy reading!